Happy 15th Year Anniversary Berman’s Call! What Would We Buy Today to Hold the Next 15 Years?

One thing we can promise in financial markets is that past performance will not necessarily be repeated in the future. Berman’s Call officially launched in its current half hour format in late March 2007. Some may recall that I did a 5-minute interview format that was featured as Berman’s Call for a few years before that while I was a regular monthly guest on Market Call. In fact, the first week ROB-TV started in September 1999, I was the Market Call guest on the Wednesday show. I’ve literally been there since the very beginning.

Since then, we have had 3 massive bear markets followed by bull markets and all were very different. The common thread was that central banks made financial conditions very easy to aide the recoveries coming out of them. I can forecast with some certainty we will see more bear and bull markets in the next 15 years. The biggest difference today from an asset perspective versus the period from 1999 is the cost of money and credit—it’s rarely been lower. From a liability standpoint, the amount of debt as a percentage of the economy has never been worse. We are also a lot older (aging demographics) and we are not as efficient (lower productivity) as we used to be in our jobs, though there is some evidence that business capital investment is rising, which can lead to a productivity increase. Bottom line is that the next cycle is likely to be very different than the one we just came through. I’m confident saying that the combination of inequality, ESG, and geopolitical factors will likely lead to a period of higher inflation than we have been used too. It will likely make the central bank’s job much harder to stimulate and fight inflation. Zoltan Pozar, rates strategist from Credit Suisse, put out some good thought pieces on the mechanics in recent weeks here and here. 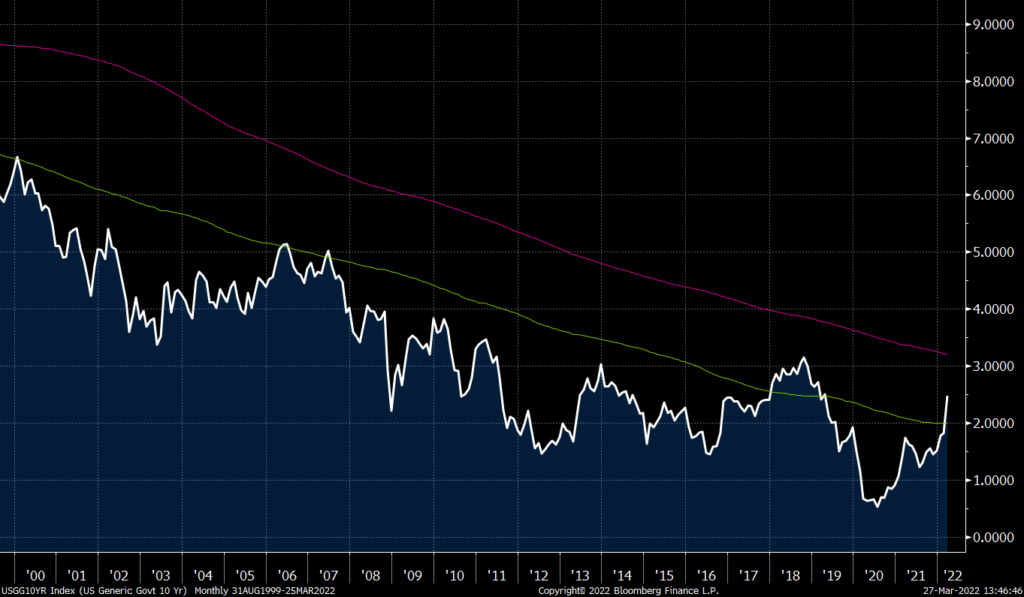 On the CPI inflation front that includes energy and food costs, all will know the story. That falling trend of inflation is likely transitioning to once of higher rates. On the personal consumption deflator side (the factor in calculating real GDP) that considers the actual consumer basket and is a bit better measure than the CPI, we are seeing both time frames move higher. The 10-year average is now moving above the 25-year average. It would seem this could be a secular change in longer-term average inflation. 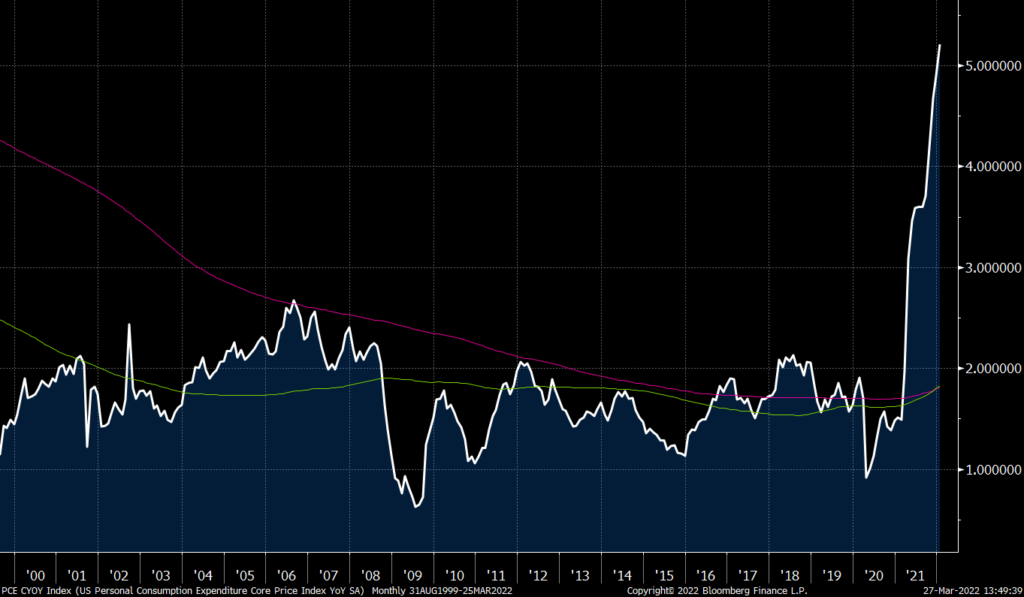 So what would we buy today that we want to own for the next 15 years? We love technology long-term, but the timing is not good until we get a better sense of how sticky inflation will be. We are dip buyers for sure. Today, were we own technology stocks, we own lower P/E names that would not be hurt as much from a period of rising inflation (and falling P/Es). Looking forward, we see 3 trends emerging.

This adds up to more price inelastic made domestically focused exposure. This favours consumer staples, health care and utilities. Nothing new here in terms of playing defense in portfolios. Mature solid dividend payers too should also benefit. I would not bet that value outperforms growth for the next 15 years, but very likely for the next few years for sure.

For US ETF seekers, AMER is a little know idea that may be just boring enough to make sense. Do not run out a buy it today. The ETF has not had any success. It’s been out since the US election in 2020 and has only attracted a bit more than $4MM. But it’s the idea that matters here. The dividend yield is low, though higher than the S&P 500, but has very good value metrics.

In Canada, we like ZUT/ZWU (utilities) for the coupon clippers for the next few years, with FXM (CI Morningstar Value) a good pick for a bit broader Canadian exposure than just utilties.

This week on our Spring 2022 virtual Berman’s Call roadshow, we will take a deep dive on how to make your portfolio a bit more boring in dealing with the coming inflation challenges. Join us weekly (Thursday 7pm ET) through April 28th. Keep an eye on The Investor’s Guide to Thriving website for more information on how to sign up for notifications. The theme this year is Berman’s Call deep dives. More in-depth looks on combining fundamentals and technicals to mine for investment ideas. Should be a great series. If you have learned a few things over the years from our educational segments, please consider supporting one of my favourite charities. Dementia and Alzheimer’s research at the Baycrest Hospital/Rotman Research Institute is world class. Each year I raise money for this cause and match all BNN viewer donations. In the past 9 years we have raised almost $500,000 thanks to you. Please consider sponsoring here.