The Income Statement Looks Good, The Balance Sheet Not So Much

Most financial pundits focus only on the income statement and not the balance sheet. The income statement can be bolstered by financial engineering. In the past 15+ years since we entered the ultra low rate interest rate environment, adding debt to corporate balance sheets to buy back shares has been the favourite choice of the C-Suite. IT BOOSTS EARNINGS PER SHARE! The balance sheet often tells the better longer-term story. You have probably heard that earnings are good and we’ve seen the quarterly “game” of beating earnings (aka financial engineering) never more a part of the market zeitgeist. But the cost of a few decades of financial charades is percolating in the credit markets. The quality of the global corporate balance sheet has never been worse. Junk bonds have a credit rating of BB (S&P) or less. There is currently about $7 trillion of corporate debt sitting at BBB with some 2000 companies. A huge portion of this debt is coming due over the next few years. Companies like Tesla that has had to rely on this market to fund itself are most at risk. About one third of the S&P 500 is at risk for downgrade to junk status during the next economic downturn. To deny this fact is just a ridiculous notion—it’s coming, it’s only a question of when. 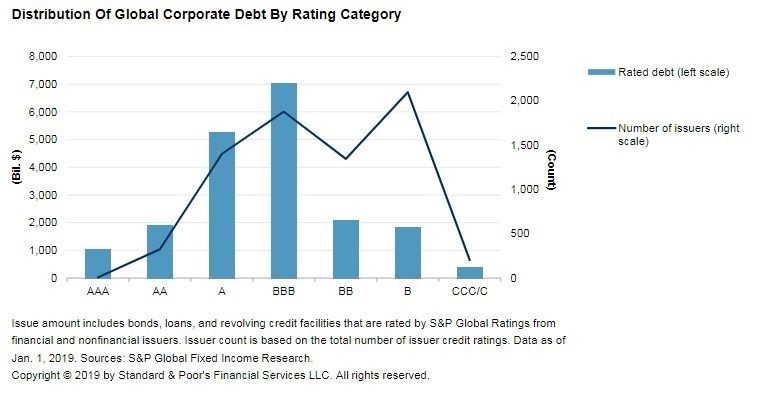 When President Trump tells America he’s the best and the economy has never been better he’s lying at best and at worst he’s a Con Man. The only reason the economy is growing is an increase in debt levels. Our chart shows the long-term (10-year average) GDP rate for the US economy compared to the level of 10-year interest rates and the amount of debt outstanding relative to the size of the US economy. We have seen almost 40-years of falling interest rates and that has led to an explosion in debt levels relative to the size of the economy. In 2018, the US ran a deficit of 4.4% of GDP and the economy grew at about 3.0%. If the US balanced the budget, there would be ZERO economic growth. The economy is not the best ever as the President would have you believe. In fact, it’s getting much worse because the debt burden is building.

To say I’m concerned about governments not managing the fiscal purse is an understatement. There is massive debt bubble and I suspect it’s going to either keep interest rates low for decades to come or force a debt monetization. Either scenario to be is a sign of failed policy. 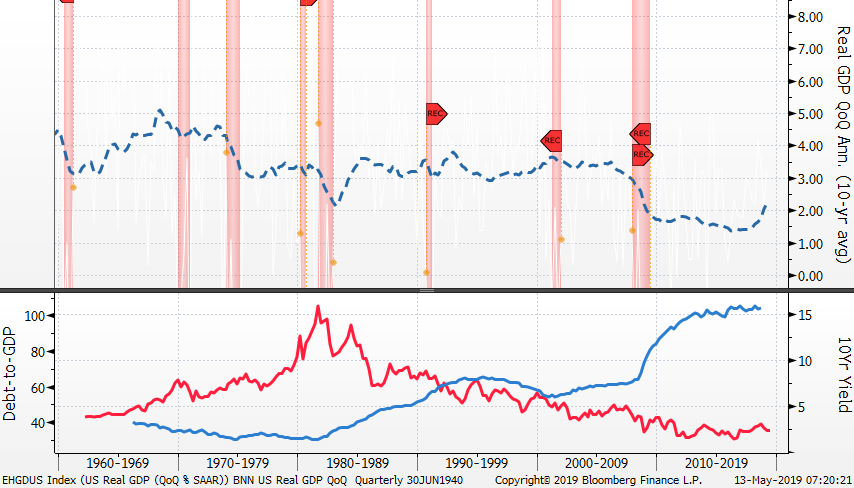 For viewers with lots of exposure to high yield bonds, I can’t emphasize more that there is a ticking time bomb in your portfolio. I don’t know how to say it any better. I just can’t tell you when it will blow. But it’s coming. The truth is I’ve been warning about this for a few years now and just to underscore you cannot time markets. We can only recognize the risks and try to avoid them. 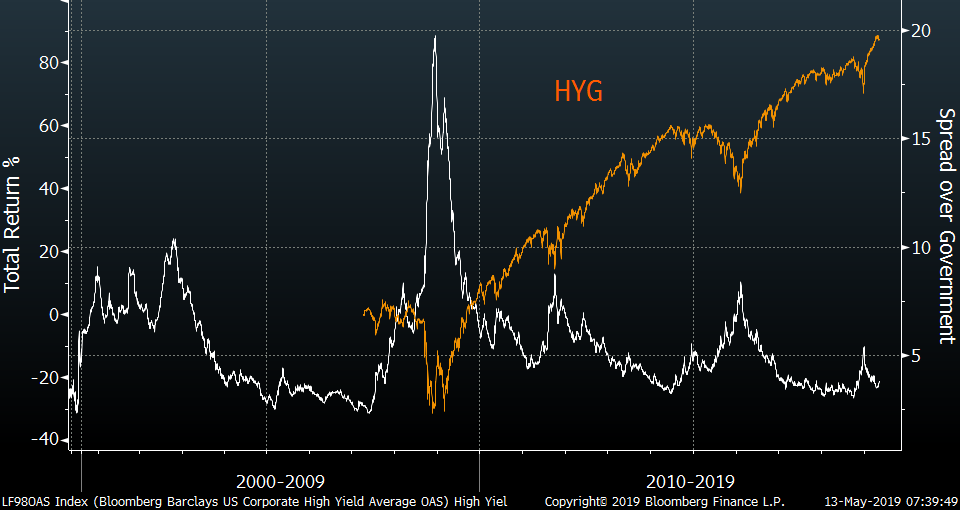 The spread that high yield trades at over (risk free) government bonds is the key to understanding the risks in this type of debt. When the spread widens, as it always does during economic shocks or weak periods in equities, that is where price risks are greatest.

Join me for a live on-line webinar Tuesday May 14th 1:30ET. Click here to register for free if you could not make it out to one of our live events. I will take a look at the last 3 bear markets and give viewers some ideas how to navigate the markets.