How I’m Playing the Canadian Dollar in the Coming Months

The most dramatic move in any market over the past few months has to be the 10% rally in the Canadian Dollar. A few months back we introduced you to our three favourite indicators to show you why we were completely hedged in our US Dollar exposure. Now is the time to go the other way according to our models. One caveat, however, markets often overshoot rational expectations. The 180 degree turn on the interest rate outlook from the BoC is probably part of a coordinated effort by central banks globally to reduce stimulus and soften the US$. The 10% rally in the C$ has made monetary conditions considerably tighter as many have commented. When we consider the three main driving factors for the currency value we see extreme positions on all indicators.

As the chart shows, we are at extremes on two measures relative to the ranges of the past few years. For WTI, the high of the past few years has been closer to $60. Many market experts had predicted that OPEC cuts would put global energy supply and demand back in balanced, but that has not been the case and we do not expect WTI to get much above $50 over the balance of the summer. Most likely, Fed policy and BoC policy will be the driving factors in the coming months with less influence from energy markets.

The Fed has taken a slightly more dovish bias in that they may pass over on a rate hike or two in favour of beginning to normalize the balance sheet or what we can call quantitative tightening (QT), the opposite of quantitative easing (QE). At the same time, the BoC appears to set on tightening policy (raising rates). The last time 2-yr interest rate differentials were at current levels, the C$ was close to current levels around 80 cents. This suggests there probably is not too much more demand for C$ coming from that factor.

The speculators were caught leaning dramatically the wrong way a few months ago looking for the C$ to weaken further. Today, they are as bullish as they have been in a few years. In the past, that has meant they will cover their long positions and push the C$ lower. This could continue, but the drivers of this factor are typically a combination of the previous factors and the macro outlook for Canada. It has been improving on the economic data front, but Canada’s world beating growth is not likely sustainable given Canada’s fragile real estate sector and it’s link to higher rates. 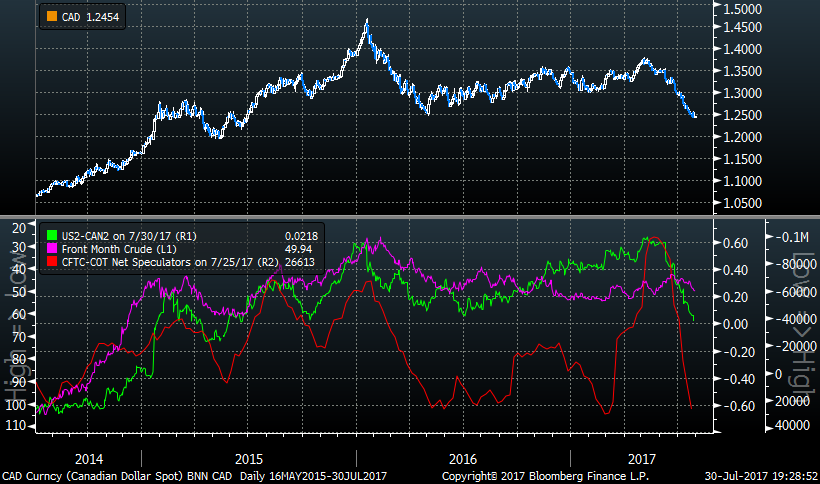 For my portfolios, we flipped to a high percentage of US$ exposure last week and we think we should see these extreme factors begin to work in the opposite direction (slightly weaker C$). What happens past October is anyone’s guess, but we look for the C$ to establish a new trading range between about 77 and 81 cents until then. Why October? The combination of the debt ceiling debate, the end of hurricane season, the end of driving season, and the beginning of the building of oil inventories, along with the beginning of QT are too hard to contemplate at the moment.