Assessing the Risk of a Market Correction

We finally saw a bit of volatility last week ignited by the tough talk between Trump and North Korea. Will this be the catalyst to ignite the next material market decline? Reading the “Tape” is not for everyone. It’s a skill that is fraught with investor bias and cognitive dissonance risks. One day the “Tape” looks good, the next bad, and you can easily flip-flop on your opinion increasing trading activity with no meaningful benefit. One solution to deal with the potential for hyper noise trading, is to always look at the same indicators in the same manner. I like to look at the different behaviour between the average stock compared to the market cap weighted index. We do this by looking at an equal weight index ETF and compare it to the traditional market cap weighted index where the larger companies influence the index more.

For the S&P 500, the top 10 holdings control about 20% of the index. In the equal weight index, the top 10 controls 2.5% of the index. Since BREXIT, the market cap weighted index has outperformed the average stock by 3% (17.17% vs. 14.14%). That divergence started in mid February. Prior to that, the indexes were tracking pretty tight.

We are always looking for the bullish pattern of higher highs and higher lows and what tends to happen next. Looking back since BREXIT last year, we see the weaker pattern develop into the US election, but since we see a consistent bullish pattern. In layman’s terms, every time we have seen weakness, buyers have come in at progressively higher levels to buy the market. And every time we have the opportunity to make a new high, the sellers do not show up and the market makes a new high. So far, there has been no “technical damage” to the psychology of the bullish trend. This does not speak to valuation—I think the market is very overvalued (I will cover that in a future educational segment). 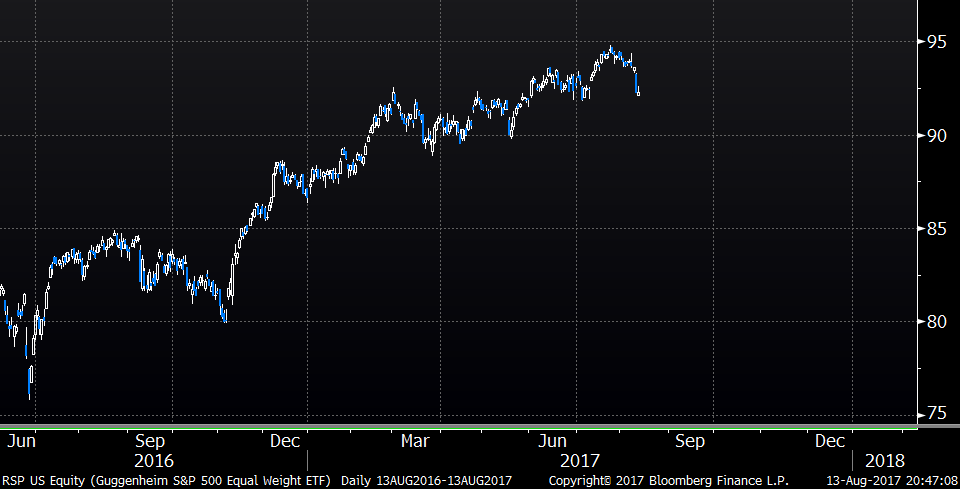 The next thing I look at is how smaller companies are doing compared to large caps. In the US, the Russell 2000 represents the broadest measure of smaller companies (typically 100 million to about 5 billion). Large caps are typically 8 billion and higher. The top 10 stocks in the IWM ETF that mirrors the Russell 2000 is about 2.5%. We can see that since the massive post election rally, we have not seen any material gains this year. Since the small cap rally peaked about one month after the US election, small caps are flat as of Friday’s close. We can see that support below 135 has been tested consistently all year. A close below 133 would be a bearish sign that small caps are breaking down. I expect when this happens, it will fall to at least 125 (the highs prior to the election). The psychology of testing breakout levels is an important one. A test of the 115 level, the lows seen prior to the election, would suggest that the main reason for the rally (tax restructuring) will be very disappointing. We won’t know what that looks like until October or so. 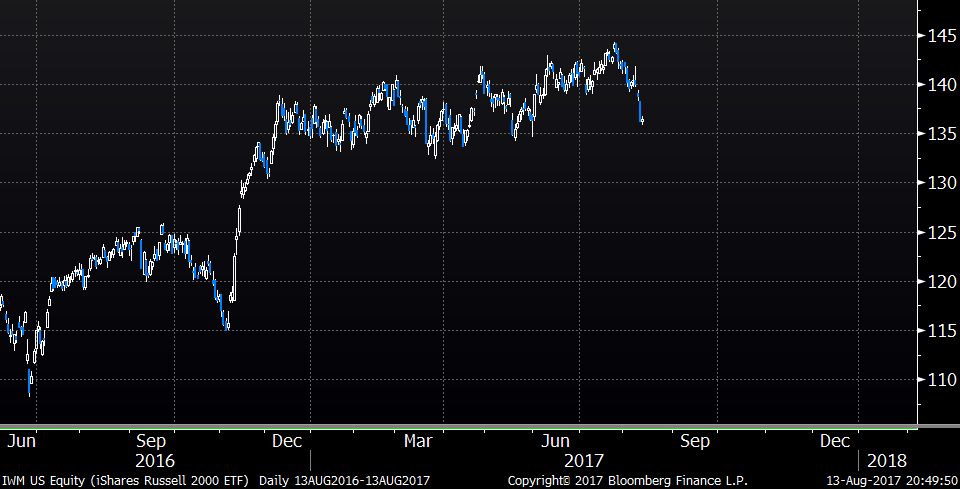 Finally, we look at how many stocks in the S&P 500 market cap index are above various different trendlines (averages). We look at the % of stocks above the 10 (pink), 50 (yellow), and 200-day (Orange) averages. Here, we can see the decay in the average stock trend. It’s clear the largest companies are holding up the broader market. Market tops die off slowly and the timing of the tops vary dramatically. Bottoms are relatively easy to spot compared to tops. 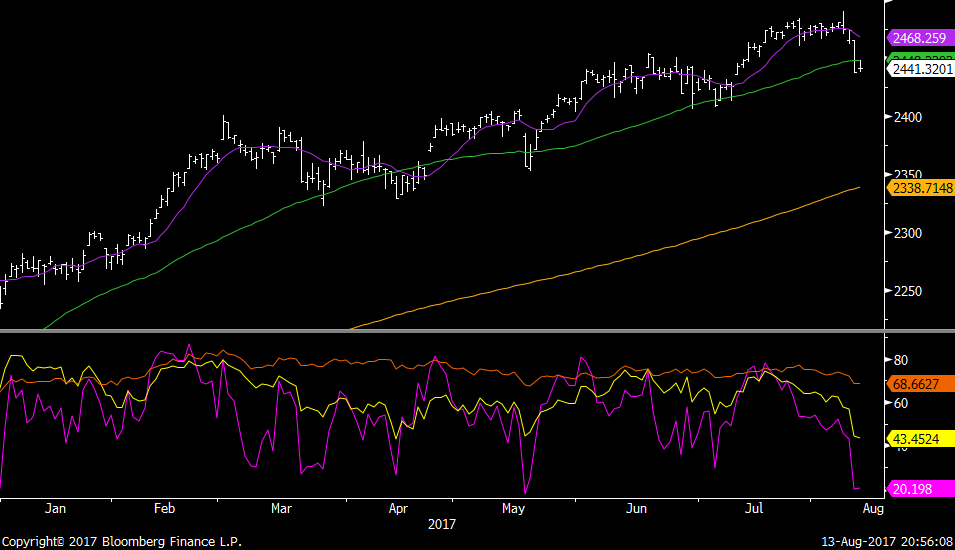 It never looks dire at the top. People only worry long after the top is obvious. In fact, the average decline of 5% or more over history is about 13.4%. I measured it myself since 1926 when daily data was available on US large caps. By the time you recognize a top and start to feel the pain of the losses, it’s usually time to start buying. At some point we are going to see a 20% plus correction. The catalyst is probably not geopolitical and most likely that if it comes from the US, it’s the inability to materially get tax reform done. That’s probably the most important policy decision of the current bull market. We wonder if they can’t get it done, who “The Donald” will “Twitterfire” for that—what a disaster!

One thought on “Assessing the Risk of a Market Correction”