Can The Solar Eclipse Affect Markets? A look at Financial Astrology.

Mark Hulbert of Hulbert Financial Digest has spent his career following financial advisory newsletters and building a database of sentiment indicators, largely in hopes of finding contrarian indicators. Last week, he wrote a column about solar eclipses and I thought it would be fun to have a look at financial astrology given the total eclipse of the sun today.

Many years ago I had the most famous financial astrologist Arch Crawford as a guest on the show. I don’t recall his market call, but I bet it was statistically insignificant. Crawford bases his market forecasts on a combination of technical indicators and planetary movements.

Arch Crawford, in the most recent issue of his newsletter, specifically mentions the Aug. 1, 2008, solar eclipse that was visible in Russia. Six days later, that country went to war with Georgia. Crawford writes that, in the wake of the Aug. 21 eclipse this year, “hostile reactions will be immediate. Like it or not, historic events will ensue around this time, and most certainly involve the United States!” He adds, however, that this hostility won’t spell the end of the bull market. He instead expects “a higher high after some further corrective action during this summer, perhaps around the December-January time frame.” Arch, that sounds like good old seasonal patterns and has little to do with financial astrology. The research into financial astrology is thin, but there have been some papers written.

Hulbert looked into the academic research around astrophysical events and the stock market and came up with the following short list.

• “Good Day Sunshine: Stock Returns and the Weather” was conducted by David Hirshleifer of the University of California, Irvine, and Tyler Shumway of the University of Michigan. The researchers found that a country’s stock market performs significantly better on days when the sun is shining in the city of its leading stock exchange.

• “Are Investors Moonstruck? Lunar Phase and Stock Returns” was conducted by Lu Zheng of the University of California, Irvine; Kathy Yuan of the London School of Economics; and Qiaoquia Zhu of the Australian National University. The researchers found that “stock returns are lower on the days around a full moon than on the days around a new moon.”

• “Winter Blues: A SAD Market Cycle” was conducted by Mark Kamstra of York University; Lisa Kramer of the University of Toronto, and Maurice Levi of the University of British Columbia. They found that stock market returns in countries around the world are “significantly related to the amount of daylight through the fall and winter.”

It would seem from these results there is at least some statistical correlation about returns and the amount of sunlight and other astrophysical factors. A concept of behavioural finance and statistics between correlation and causality is at play here. If you look at any two data series and do a statistical analysis, you will find things that have a high degree of correlation. The movements of one series explains a high proportion of movements in another series. For example, U.S. retail sales months reports will have a correlation with the returns of U.S. retail equities. In this example, you can see the direct causation between the two series. One clearly sees that causality between the two series and the effect of them on each other. But when looking at astrophysical events, it’s much more difficult to see why one would affect the other.

Hulbert did a correlation analysis of the 13 total solar eclipses that were visible in the U.S. since 1900. He found very little correlation and an added note from me is that 13 samples are not particularly statistically significant. He found the closest turning point to solar eclipse was the market bottom on Sept. 7, 1932, which came just a week following the eclipse on Aug. 31 of that year. Other eclipses haven’t occurred anywhere near as close to turning points. The eclipse on Jan. 24, 1925, for example, came in the middle of the great bull market of the 1920s; no major trend change was on even the distant horizon.

On average since 1900, 10 months have separated major market turning points and total solar eclipses that were visible within the U.S. But there was a huge range: The standard deviation of this spread between turning points and eclipses was 6.6 months, which means that—assuming the future is like the past—we can at the 95 per cent confidence level say that the Aug. 21 eclipse will be followed by a bull market top within 23 months.

Hulbert went on to look at other factors.

Might it be that even though the major trend doesn’t change when there is a solar eclipse, the stock market performs better or worse than average? To check that possibility, he measured the Dow Jones Industrial Average’s returns over the week, month, quarter and year before and subsequent to each eclipse. Once again he came up empty.

That’s because there was a fairly even distribution between eclipses for which the stock market was followed by below-average returns and those for which there was above-average performance. The same was true for returns before those eclipses. His statistical software was unable to detect any unusual pattern in any of these returns.

Tom McClellan, a good friend and writer of the top ranked McClellan Market Report, showed a chart last week in his daily newsletter on gold versus full moons. He comments that he came across the influence of full moons on gold many years ago when he was trying to disprove it. He claims that the full moon either reverses the trend ort accelerates it. Looking at correlation and causation, we can see the correlation, but the causation is lacking in my mind. I know Tom to be an exceptional market analyst, but without causation, I think it’s best to not pay any attention at all to financial astrology. I’ve heard the reasons why it makes sense. The movements and gravitational pull of the moon impacts the tides and solar flares clearly have weather impacts on our planet. So I can see some causation as it relates to some weather driven commodity markets, but beyond that I have difficulty on why you would want to factor it in. 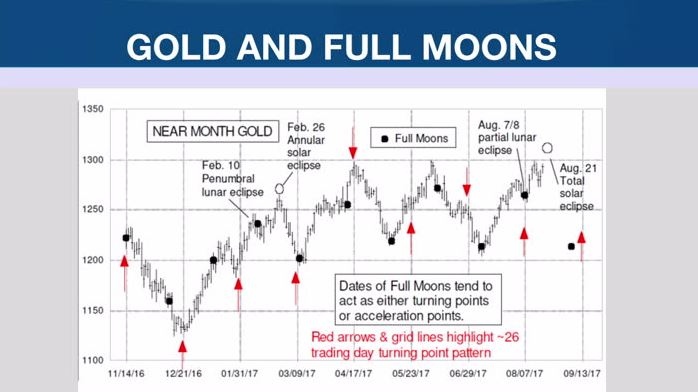 The bottom line? It’s difficult to conclude if there is any impact at all from astrophysical influences and this has little to do with the important aspects of your portfolios. Asset allocation and diversification are in the long run the most important factors for your portfolios. Try not to get caught up in the emotional ride of the day-to-day market noise.