Tulip bulbs were once a store of value. Their value was determined by their beauty and what the next person would pay for one. They can die (and can be mined so to speak), which was a troubling sign, but they never had stable demand… the level of demand was always speculative.

Bitcoin is a store of value. Its price volatility and violent swings suggests demand is not stable and it, too, is a speculative vehicle. It’s new and people are having a challenge determining a relatively stable fair value. How does one value at Bitcoin or other cryptocurrencies?

Fiat currencies (our current monetary system) are backed by the full faith and credit of the government. The government’s ability to tax its citizens backs the currency and a small amount of gold.

The key for all of these things is the confidence that you can easily trade your store of value to. The main difference is that they die. So Bitcoins are not tulip bulbs, but they are a store of value. It now takes more than one month salary for the average person in the world to buy a Bitcoin.

The trust unit GBTC (listed in 2014) tracks bitcoin at a 10-to-1 ratio. It is trading at a 40 per cent premium to the underlying value. It has an average premium over the past year of 48 per cent due to the scarcity value of accessing Bitcoin. My investment conclusion: Run as fast as you can, or short it. 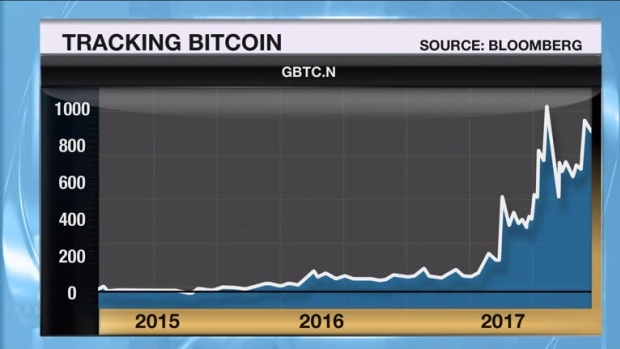 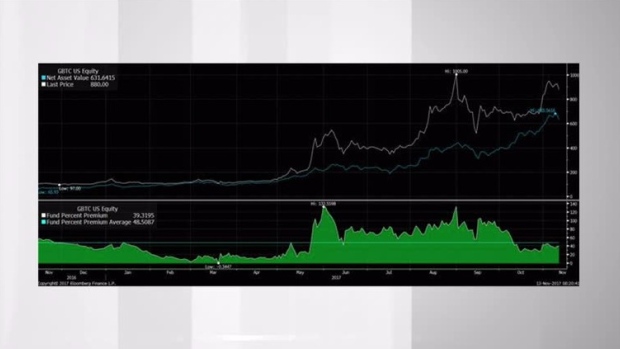 Over the past month, volatility has really picked up. Over the weekend, we saw a decline over 20 per cent and it had fully recovered as of 8:20 a.m. ET on Monday. If you do not believe this is all about speculation, you have a lesson to learn. 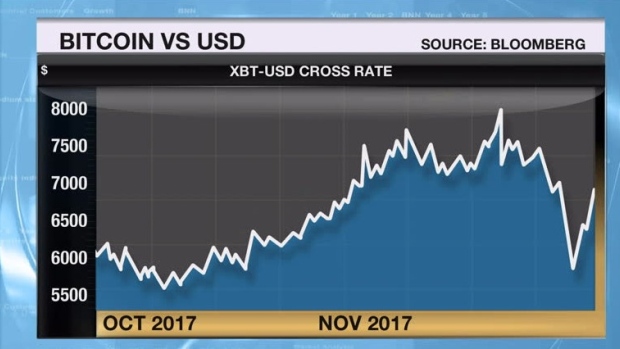 The Blockchain technology that drives it will no doubt be part of the new world. I believe that the world will move to a paperless currency system within 20 years, perhaps sooner. Sweden will likely be the first developed nation to embrace a fully digital currency and I’m watching that closely. Ecuador already has a digital currency but it’s clear there are some growing pains.

A move to a digital currency will virtually eliminate the black market and improve tax compliance to near 100 per cent. This is important since most governments are basically bankrupt in their ability to balance budgets and pay for the entitlements of a rapidly aging population. There will always be a barter economy and that is impossible to tax, but I’m always happy to trade some investment advice for a good teeth cleaning with my dentist.

That said, the bubble is not over. Bitcoin is still very new, it is not owned by enough people to suggest there are no more buyers. A simple survey suggests very few people own it.
The trend likely lasts until liquidity is challenged. In a bear market, everything gets sold when the margin call comes. For assets with no intrinsic value, history shows that they get hit the hardest. We have already seen a bankruptcy in the sector, which you would only see in currencies of rogue regimes like Zimbabwe. With all currencies, poor management of the government’s ability to tax and spend has led to debasing of the currency value.

If you think the governments of the world will allow Bitcoin to be anything more than a payment system in the long run it is a naive view in my mind. Governments need to control the money supply to manage the economy and the rates of interest. We do not see that changing. That makes the underlying technology very valuable like Paypal or other such systems. But, when you buy a Bitcoin you do not own the technology, you own a store of value as long as it lasts. My conclusion is that it is a speculative vehicle at best and caveat emptor applies. Unless you are a speculator with huge tolerance for risk, it’s not something that you should consider in your retirement portfolios.

If you want to learn how to make better investment decisions and how to build portfolios that fit your investor type, come out to the current Berman’s Call tour (The Investor’s Guide to Thriving). You will learn about some of the behavioural biases that might be hurting your investment returns and learn how properly diversify your portfolios. Learn how to identify what type of investor you are and some techniques to improve how to manage your asset allocation so you can preserve and grow your portfolio. The events are free and we ask for a voluntary charitable donation to either Sick Kids Hospital or Baycrest Brain Health research for Alzheimer’s.

One thought on “Bitcoins vs Tulip Bulbs”