If Low Rates are Truly Supporting Equities, Why Does Yellen Want Them Higher?

Treasury Secretary Yellen said after her return from the G-7 finance minister’s meeting that President Biden should push forward with his $4 trillion spending plans “even if we ended up with a slightly higher interest rate environment it would actually be a plus for society’s point of view and the Fed’s point of view.” Treasury supply this week (June 9th $38B 10s, June 10th $24B 30s) will be a big test for markets in light of these comments. The early year stocks market volatility was triggered by rising yields.

The inflation debate has intensified around the idea that inflation pressures are transitory as anomalies such as supply-chain bottlenecks and a surge in spending as economies reopen squeeze supply side factors. Critics say trillions in additional government aid could fuel a lasting spike in costs. “We think policy moves going forward are more about fixing inequality issues and what that will mean for persistent increases in labour costs.” Rising wages are a good thing for broad and balanced economic strength compared to the benefits to asset owners that have driven incomes for the past decade. This would add some inflation and margin pressures. With profit margins close to all-time highs, in part due to low rates, many think there is plenty of room for wages to rise. 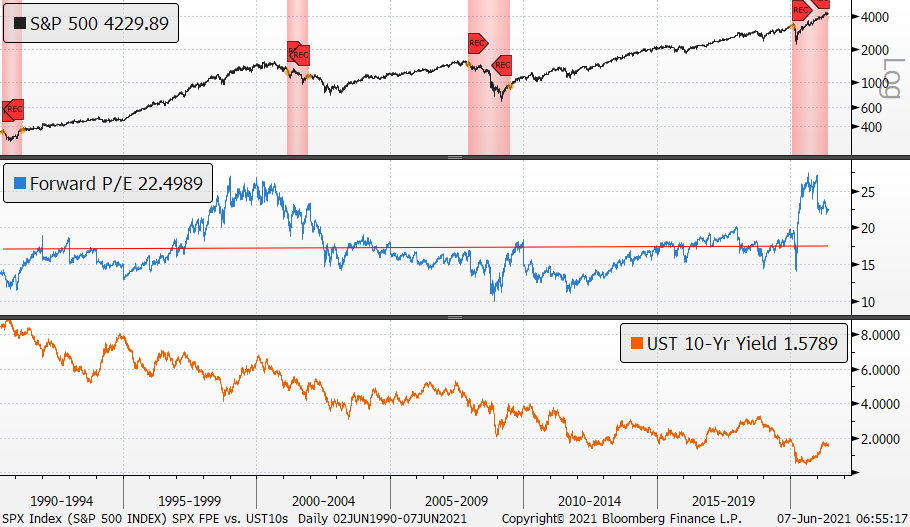 Biden’s packages would add up to roughly $400-600 billion (2% plus of GDP) in spending per year over a decade.  Republicans are fighting that as much as they can, but since the Senate Parliamentarian recently ruled that the budget resolution can be amended to account for material changes allowing more than 1 Reconciliation bill per fiscal year, they can force through a bigger Bill.

The timing of the Bill should matter for markets. The closer it is to boost the economy into the 2022 elections the better it may be for the Democrats. The smaller the Bill is and the more contentious it is to pass, the more it likely helps the Republicans. Yes, we have another important issue that will become a political hot potato. The Senate Parliamentarian has clarified that a revision (permissible) to the budget resolution cannot be automatically discharged from the Budget Committee under the rules allowing for revision, because a revision is not tied to the timetable written into law for reporting a budget resolution (April 1st). This means that a revision would have to enjoy bipartisan support in committee to be discharged under the current even split among Democrats and Republicans on the Budget Committee. The split is even because the current Senate is split 50 50. In practice, this means that Democrats will only be able to use 1 Reconciliation Bill this fiscal year. They would have to use a 2nd sometime after April 1st, 2022. This likely makes it an election issue and could leave a post-stimulus fiscal hole in the economy from October to March.

The inflation expectations debate is very important and some of it is tied to stimulus and budgets. Markets that have been boosted to higher multiples by low rates are key to this debate. Do the Democrats want a strong economy (and markets) in November 2022? If there is going to be a weak spot, it likely comes sooner than later. A fiscal cliff is likely later this year given the mechanics of the law. To the extent that consumers really have not spent the most of the Covid relief checks will be a wildcard to be sure. There are lots of moving parts as always.

We think that supply squeeze driven short-term inflation pressures will prove to be transitory, to the extent that labour’s share of income starts to rise and adds to higher inflation pressures is measured in years and decades. This will be decided by voters. We believe more people are falling behind and more will vote for higher wages. Higher inflation will likely serve to lower market multiples in the coming years. Seems like a hint of stagflation is brewing.