Should We Be Worried About the Similarities with 1987?

There has been a lot of talk recently about the similarities between the 1987 period and today. The current market volatility looks a lot like the period before the 1987 market crash. Like today, economic growth was strong, inflation pressures were rising, and the economy was at full employment. While computerized trading (portfolio insurance) was new back then, it is clear the current market structure lends itself to flash crash type risks, as we have seen. The similarities are noteworthy. Just looking at the magnitude of the rally going into the 1987 top compared to the 2017 rally is very similar, though on a percentage basis 1987 was stronger. History never repeats, but it rhymes all the time. Fear and Greed is human nature, we can gather some insight from studying the past and those that don’t study history are doomed to repeat it. 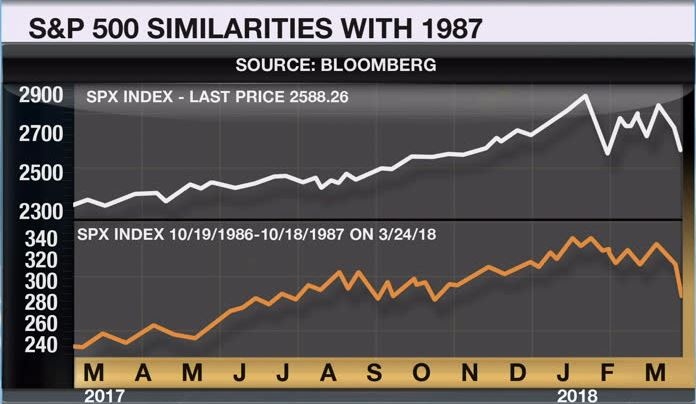 Extraordinary stock market gains and low levels of volatility were hallmarks of the year prior to the 1987 top. Similar to this year, the Tax Reform act of 1986 (Oct 22, 1986) was a key catalyst for the rally.

Rising Inflation Expectations were very much a part of the Fed tightening as Alan Greenspan took over the Fed in August 1987. In December 2015, the Federal Reserve hiked rates for the first time since 2004, ending the longest period in history without a change in interest rates and Zero Interest Rate Policy (ZIRP). In 1987, the Federal Reserve raised their Target Rate from 6.0% to 7.25% in a span of 6 months, seeking to slow down the booming economy. Soon after the crash in 1987, the first sighting of the Greenspan Put, played out. The current Fed chair also has a put, but the market thinks it’s much lower than his dovish predecessors. The central bank put means they are very sensitive to market conditions and will react to stimulate the economy when equity markets threaten the economy.

Trade deficits in 1987 were a top economic priority. Treasury Secretary James Baker was promoting a weak dollar policy not unlike Steve Mnuchin said recently. Since Trump has taken office in January 2017, the US Dollar has lost over 10% against a trade-weighted group of currencies. The currency-adjusted gains of the stock market earnings would not look as good without the dollar weakness.

In the 12 months leading up to October 1987, the S&P surged 40% higher, one of the fastest periods of gains in stock market history. Since Trump was elected, the S&P 500 rose about 30%. To protect portfolios back then, the advent of portfolio insurance was in vogue. Today it’s volatility futures.

Portfolio Insurance in 1987 and Short Volatility Strategies Today both exacerbated the fast and swift sell-offs in a similar way. Short Gamma positions means that when stocks sell off, more investors have to sell. That is, selling begets more selling. This nightmare scenario results in a black hole with no buyers as informed investors know there’s more selling to be continued.

I DO NOT THINK WE WILL SEE A REPEAT OF 1987 DESPITE ALL THE SIMILARITIES. Can this market go lower? Absolutely. That period in 1987 was an anomaly. The correction just wiped out the gains in place since the tax act was passed. It did take 2 years to get back those gains. I think the bigger correction will come during the next recession, which to me looks like it could be late 2019 on a projection of what the yield curve might look like later this year. In the next recession, investors should be ready for a 30-40% correction to the US equity market and somewhat less to others that are not as overvalued. Like 1987, that will be a great buying opportunity. As markets recover from this period of volatility, it would be prudent to get more defensive in your portfolios later this year. Timing is always the most difficult aspect of market analysis. 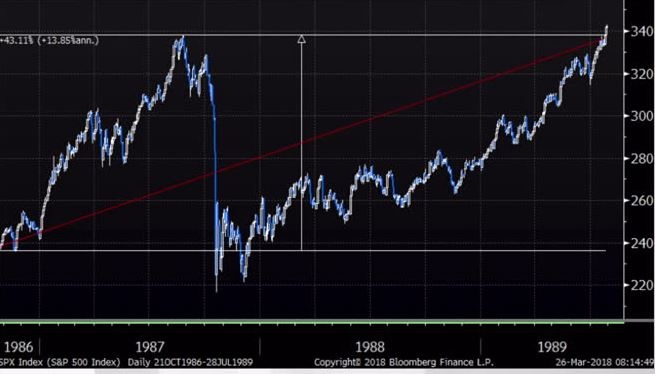 Our upcoming seminar series is underway. We will be in Ontario the next few weeks in St. Catherines and London before going out West and East. Come out to one of the events and learn about what ETFs can help your portfolio with the uncertain economic backdrop over the next few years. Register free by clicking here. We ask BNN Viewers to make a voluntary charity donation to support Alzheimer’s research at Baycrest Hospital or Cancer research at the Hospital for Sick Children.