If you haven’t heard me say this 100x before, or are just tuning in to hear what yet another one of these “talking heads” thinks is sure to happen in markets – let me disappoint again – NO ONE KNOWS what will happen next in the world! The more you dig your heals in, the worse you’ll do navigating markets. Remember, it’s not about BEING RIGHT it’s about GETTING IT RIGHT!

All that said, it’s a BNN tradition for me to use my last show of the year to forecast what I expect for coming year – and look back at how out calls worked out in 2018. We got a few things wrong for sure, but for the most part, our calls were pretty good.

1. We would see a 5-10% correction post tax cuts in US markets and no recession.

So we were a bit wrong here because we had 2 distinct 5-10% corrections. But the sell the news defensive tone was on the money. Though, the rally in January was much more intense than I expected. In fact, there is nowhere (so far) that has a positive return in equity markets. Bonds are down in price, but up ever so slightly including the yield. 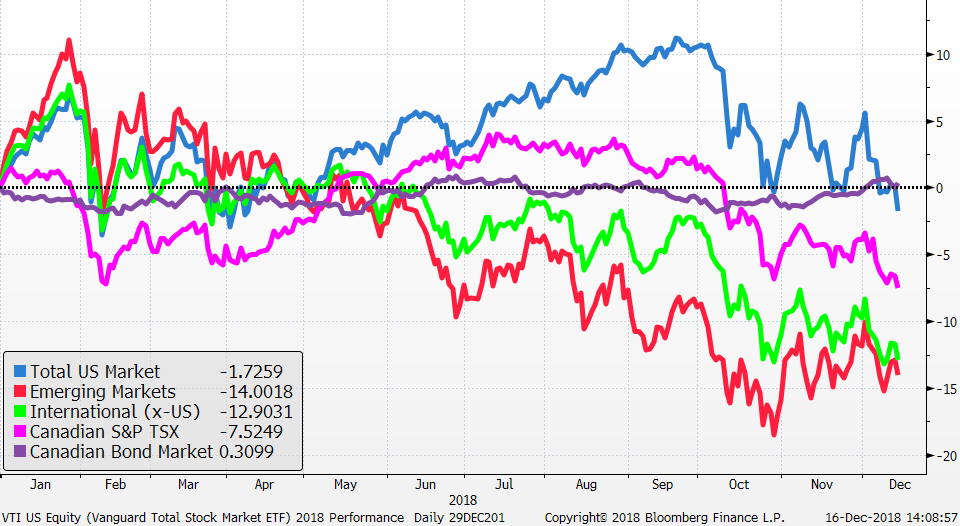 2. Bitcoin (and cryptos) is in a bubble and it would end badly.

Nailed it! Last year’s forecast was on Dec 18th, the exact high of Bitcoin. To be fair, I’ve been calling it a fraud since the beginning. I maintain my view that these are all worth closer to zero and it’s the biggest Ponzi scheme the world has ever seen. There is still 90% more downside from here. 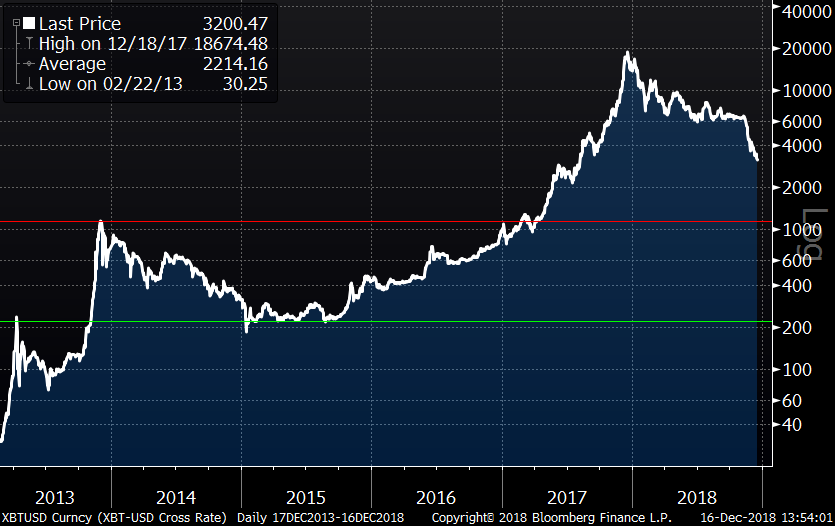 3. Commodity type markets (S&P TSX) tend to perform well late in the cycle, except too many problems with Canada.

Mainly pipeline capacity will lead to a bad year for the huge energy part of the Canadian market. In 2018, the US energy sector down 7.8% and Canadian down 19.5%.

We were correct here. The weight of NAFTA and pipeline issues as well as a peak in real estate were all contributing factors to the negative S&P TSX returns.

4. Canadian dollar would average closer to 75 cents than 80 cents given trade and energy calls.

We were basically right here too, though we did say in October that once NAFTA was solved we would rally back towards 80 cents on the way to 70 cents or lower in the next recession, which did not happen with energy prices collapsing. 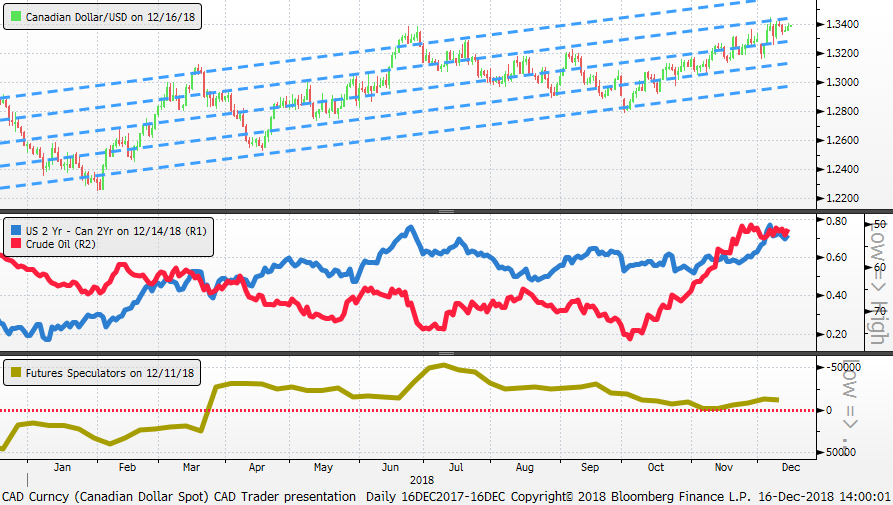 We overall took a very defensive approach to markets and bought the dip in February and March, and most recently. As we look into 2019, we see global recession risks at the highest level we have seen since 2007, when Berman’s Call started. Though the recession probably does not hit Main Street until 2020. The volatile markets should continue with a bottom in 2020. We expect this bear market will be worse than average. The average of all recession induced bear markets historically is -29% for US large caps. This one will likely be closer to -40% for those whose main strategy is “buy and hope”.

History tells us that low volatility, value, high quality (balance sheets), and covered call ETF portfolios will weather the storm better than other styles. BMO and iShares have lots of options to choose from with these investment styles. We will have more of these types of ETFs in our portfolios in 2019, until we see signs that the recession is hitting main Street and US equity markets have had at least the average peak to trough decline of -29%. The key trigger for us will be a weekly close below the 2563 intraday low for the S&P 500 in 2018. 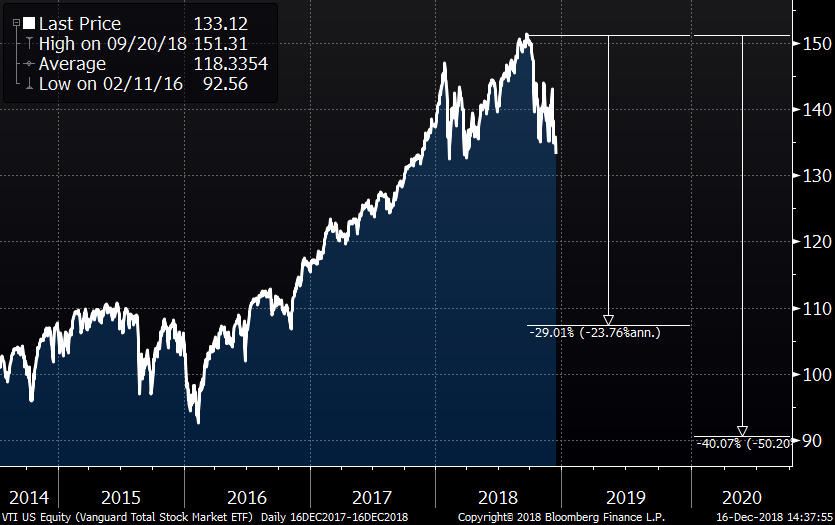 The Canadian dollar will likely dip back below 70 cents under the weight of recession and general market weakness. WTI will likely head back to the low $30’s once the recession fully plays out. We expect stability for now in the $50’s. Canadian banks fall about 25% from current levels. The S&P TSX should test support around 11,000 (currently 14,000). These are recession bottom targets for some time in 2020. The bottom for the S&P 500 is possibly in the 1600-1800 range.

If you’re a professional trader, and have the time to devote to doing your homework and watching the screens, you might be excited about the opportunities we’re likely to see in the markets. Who doesn’t love a sale? For the “buy and hope” crowd, the prospect of another bear market (you’re now 10 years older than last time) might be terrifying.

Whatever you do – don’t stick your head in the sand. You cannot time markets, so putting your money under your mattress now will either mean it’s too soon (and you miss the last leg of the bull market) or you’ll be too late putting your money back in (missing the recovery). The only way to weather this storm is with the experience to sail through it – so that’s either on you, or your portfolio management professional. Either way, now is the time to make sure you’re ready for whatever, whenever.

Wishing all BNN viewers a happy, healthy, and prosperous 2019!