The S&P 500 made a new all-time high in early July. Less than 20% of the stocks in the S&P 500 made new highs as the index broke out. Historically, 20% or more is a sign of a broader market advance; technically we call this a breadth thrust. Last week, the continued push to new highs came with less than 5% of stocks making new highs. In 2015, were it not for the impressive performance of the FANG stocks (Facebook, Amazon, Netflix, and Google), the S&P 500 would have been down about 4%. Currently, the top 10 holdings in the index represent 17.96% of the total weight and the top 66 stocks are 50% of the index. One year ago, the top 10 stocks in the index were 16.82% of the weight and the top 68 stocks were 50% of the index. Two years ago it took 70 stocks to make up the top 50% of the S&P 500. My point is that as the market has stagnated over the past few years, fewer stocks are keeping the market up. The recent drop off in breadth suggests the trend is weakening and correction risk is increasing. 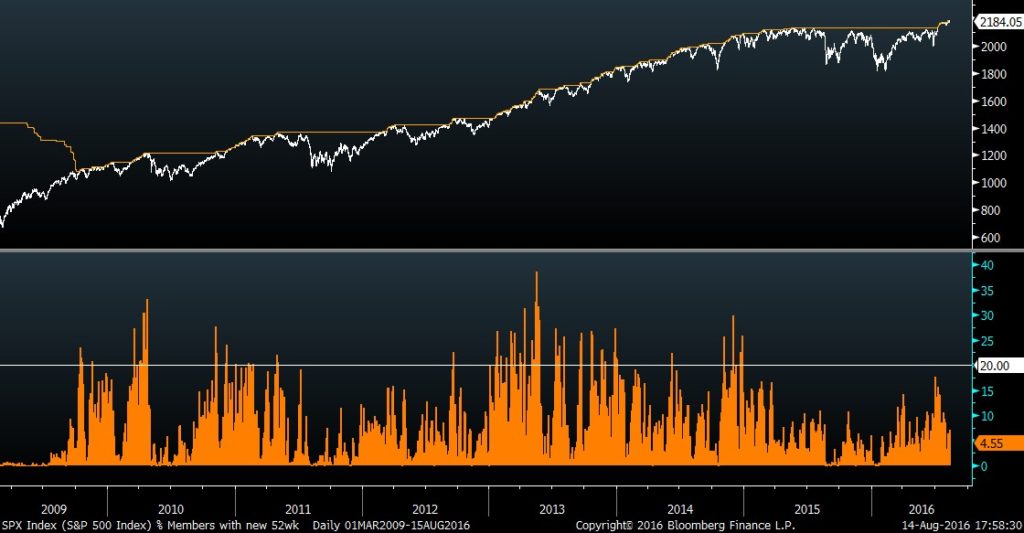 That said, these divergences were much worse in 2015 as small caps were very weak. Overall, the Russell 2000 small cap index has done better this year, but is still CRAZY over valued. The trailing multiple is 43x earnings while the one year forward multiple is a more reasonable 21.8x earnings. Small caps tend to have a higher multiple than large caps due to their higher potential for growth. But the difference between trailing and forward multiples implies that earnings growth will be close to 100% over the next year, which is practically INSANE!

With over 90% of S&P 500 companies reported, earnings season almost over and focus will soon turn back to macro issues. According to Factset, Q3 earnings forecasts have declined 2.4% since June 30th leaving lots of room for disappointment. The last leg to earnings season are typically the retailers. Given the poor showing of retail sales of late, odds are high that forward looking outlooks are reduced. The equal weight sector ETF (XRT) is still more than 10% lower than it’s 52-week high. Companies like Amazon, Home Depot, and McDonalds that make up 25% of the Consumer Discretionary Sector ETF (XLY) have done very well compared to the equal weight retailers’ ETF (XRT) where Amazon is a little more than 1% of the index. The average retailer is not doing as well as the large cap weighted retailer index suggests.

Late in the business cycle, this type of market behaviour is typical. It suggests that the broader economy is slowing, which is clear by the recent trend in US data. I’ve been defensive in portfolios for a few months and I see no reason to get excited by the market making new highs. Risk is greatest in portfolios from a market high-point, especially when the underlying breadth of stocks is not supportive.

One thought on “Fewer Stocks Lifting an Overvalued Market – Lookout Below!”