The Federal Open Market Committee (FOMC) meets this week and word is they will begin planning how to reduce the balance sheet. Yellen has long said the Fed has a plan to do this. At a high level, the US economy has been growing at an average of 1.5% annually since the Lehman moment (Sept 15, 2008). That has been with zero interest rates and government (federal and Local) government borrowing of $12 trillion (about 8% of GDP annually). A liquidity trap as defined by Wiki:

A liquidity trap is a situation, described in Keynesian Economics, in which injections of cash into the private banking system by a central bank fail to decrease interest rates and hence make monetary policy ineffective. A liquidity trap is caused when people hoard cash because they expect an adverse event such as deflation, insufficient aggregate demand, or war. Common characteristics of a liquidity trap are interest rates that are close to zero and fluctuations in the money supply that fail to translate into fluctuations in price levels. 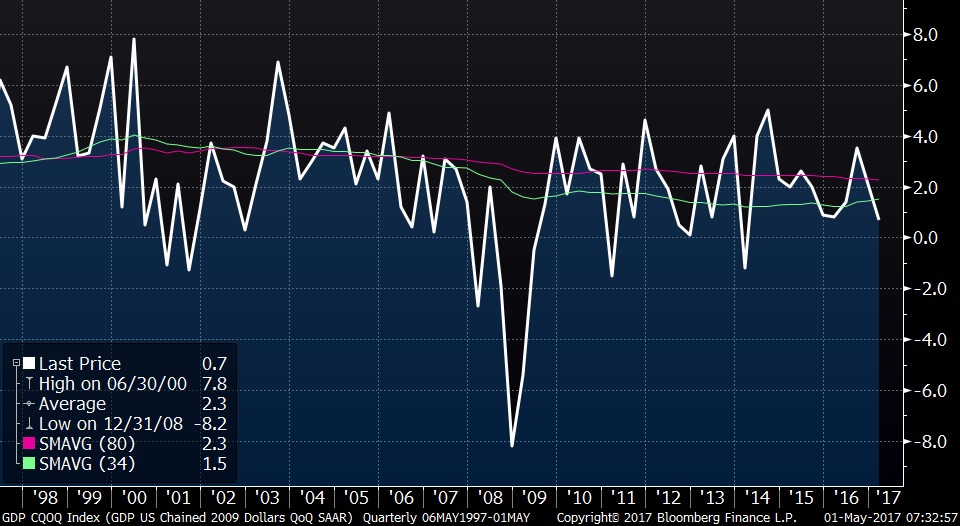 To be sure, the economy has stabilized and the Fed raised rates for the first time in Dec 2015 and has raised rates now 3 times with the current target of 0.75-1.00%. The current Fed projection is to normalize short-term rates to 3% in the long term (2019 and beyond). The average 5-year rate is basically just coming off zero. 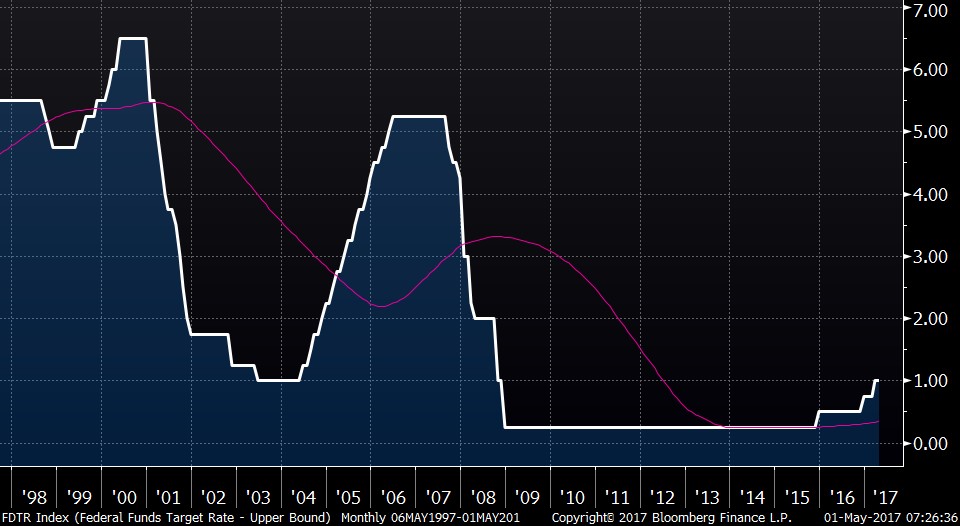 Unwinding the bloated balance sheet will be the main topic at the Fed meeting this week. Yellen has signaled that they hope to shrink the balance sheet. Since the Fed raised rates in December and March, the yield curve has been flattening. A flatter yield curve suggests the economy is likely to slow. When the US 10-year rate moves lower than the 2-year rate, it portends a recession. The last two have been good barometers, but we do not always get a recession. The persistent flattening since 2008-2009 (as the Fed put short-term rates to zero) suggests a weaker economic backdrop. The difficult analysis here is because we have never seen the Fed buy longer-term bonds before (quantitative easing). It has distorted the yield curve and there is no precedent to know how it might behave when they start unwinding it. 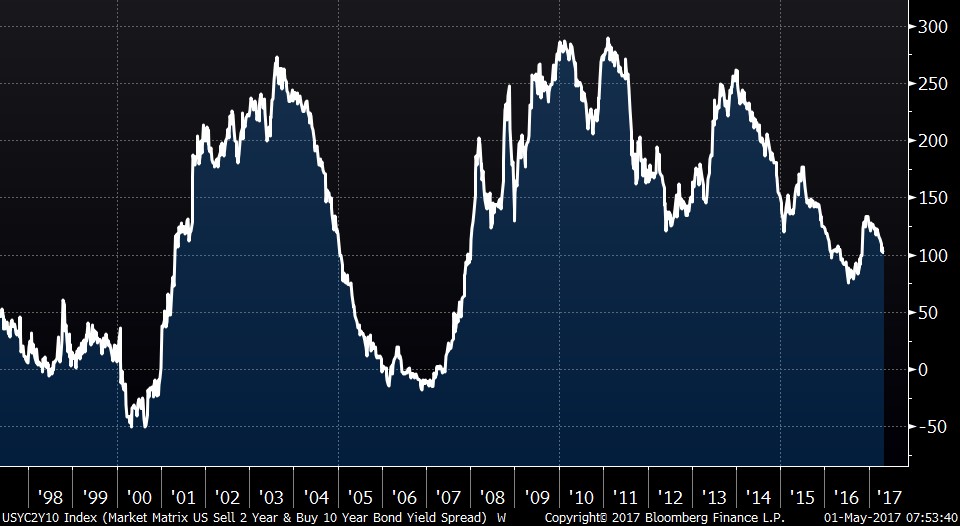 The current balance sheet assets are around $4.5 trillion and have been steady for the past few years. The Fed has been rolling over the existing debt. They have discussed selling some of the longer dated bonds, which in theory would steepen the curve. If longer-term rates (5-year specifically) rise, the housing market would be at risk. 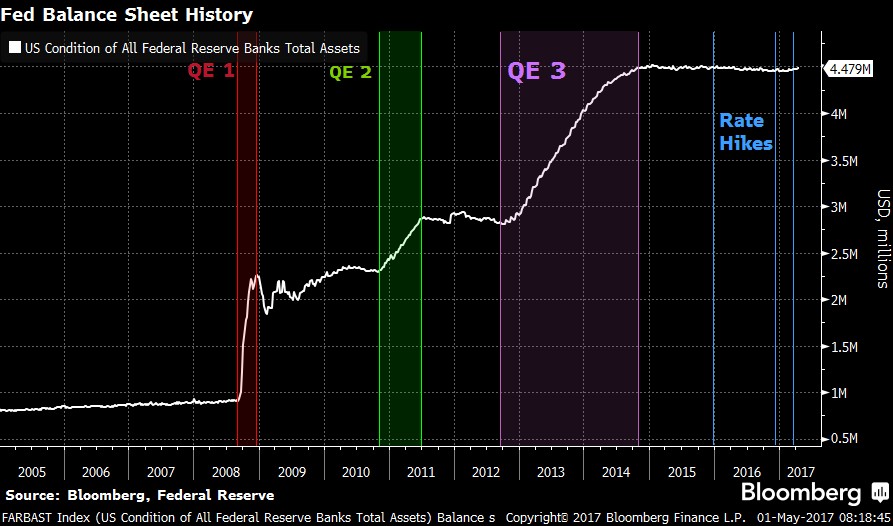 We believe the only reason the economy is growing at all in recent years are the low rates and more importantly the massive government deficits. It’s clear under the current budget negotiations that there is little tolerance for more debt, but they don’t have a choice unless they are willing to reform entitlements. 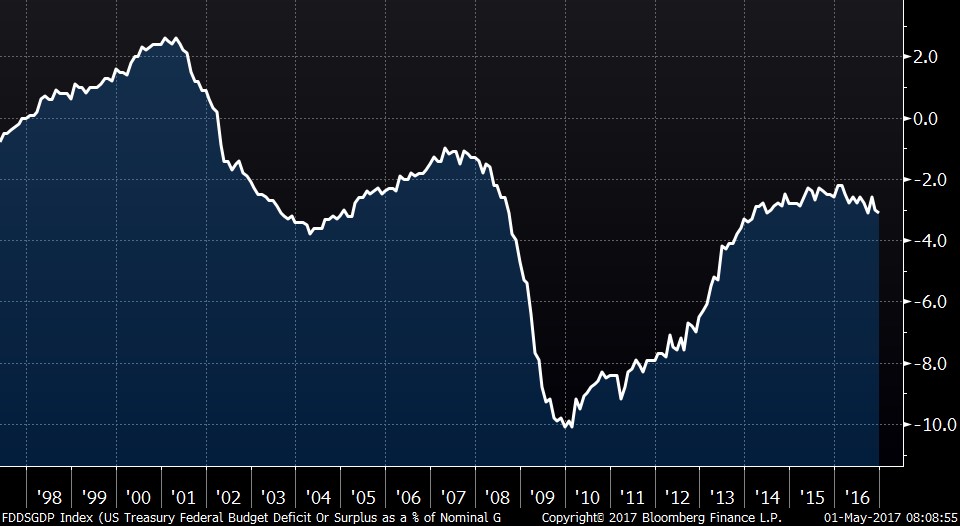 US deficit spending as percent of GDP

Bottom line is there is no economic growth without low rates and deficit spending for decades. Do you really think that is going to be better in the future with all the demographic headwinds of an aging population?

Look for rates to stay low for decades. We do not see it any other way. I’d love to hear from BNN viewers who have any ideas how to fix this massive problem. It’s clear the biggest economy in the world has a growth problem.