Fed Rate Hike Cycle: Can We Rely on Historical Reaction?

The history of Fed rate hike cycles and equity market behaviour may be different this time. Cost push inflation is not something the Fed has much control over. Powell told us in his recent testimony to Congress that they have the tools, but we beg to differ. The table below was compiled by LPL using Bloomberg data. It shows the rate hike cycle over the past 40 years. The problem is that it was in an era of falling inflation pressure unlike the 1970s. To be clear, this is not likely the 1970s, but it seems more like it every day. The conclusions of the research are missing this key point. The hiking cycle in the stagflationary 1970s did not show equities higher over the next year. 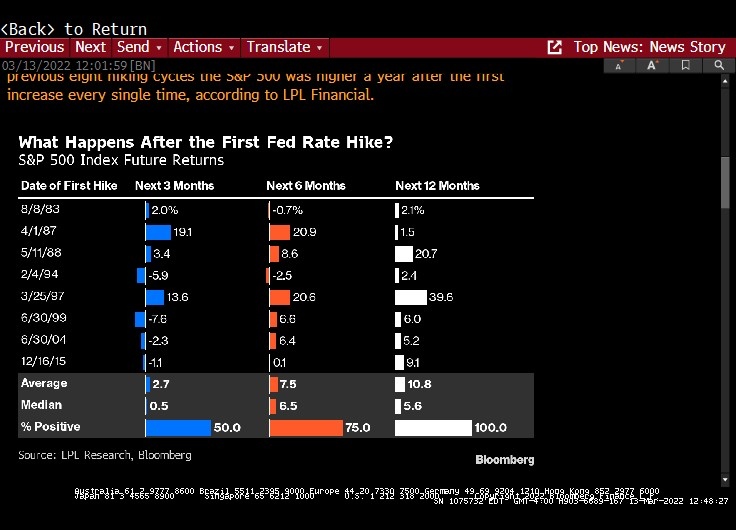 LPL research sets the tone with the following points. The S&P 500 Index is off to its worst start to a year since the Covid-fueled selloff in March 2020. The world is now it’s facing the largest ground war in Europe since World War II, and the fastest inflation since the 1980s.

They content that history shows U.S. stocks are poised to experience more volatility following the rise in rates in that the first 3 months is a coin toss. But that it doesn’t mean that the bull run is over. While the first rate hike came in June 1999 and the markets were higher 1 year later, it was the breaking of a massive bubble as all will know. The first rate hike following that bubble break was in June 2004 and the peak did not come until October 2007. But that was another incredible bubble that burst. We could argue elements of both housing and valuation bubbles this time around.

They note the oil shocks and the economic downturns in the mid-1970s, early 1980s and early 1990s, but seemingly dismissed the market impacts to rate hikes in the 1970s. This is a clear case of data mining. They correctly point out that this quarter and the next two are historically some of the weakest of the four-year presidential cycle.

Looking at the 1970s, inflation, and the rate hike cycles and one does not get a dismissive concern that a Fed policy mistake is a very high probability. What is causing inflation today is not demand pull, it’s supply side via labour issues and resource scarcity. High rates will not fix those problems. The Fed suggesting it does is understood, what else are they going to tell Congress, but the reality is likely a bit different. 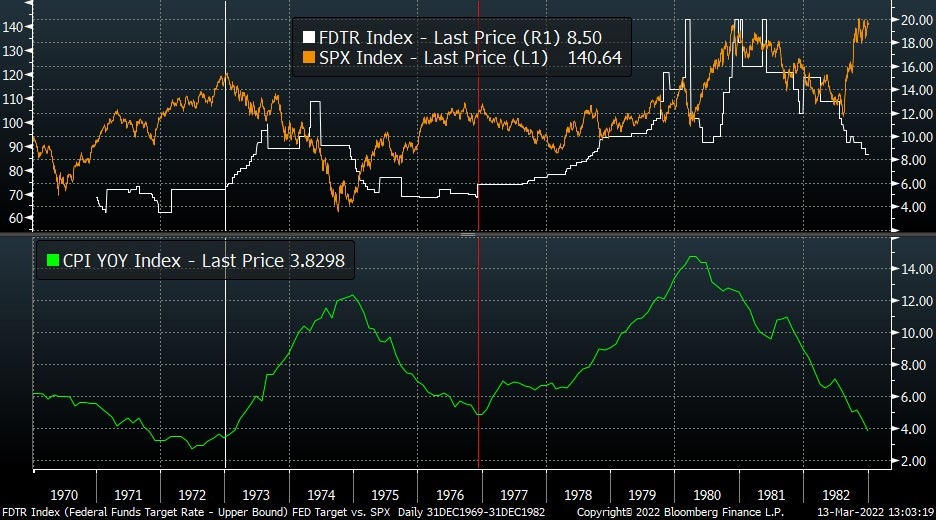 This week on our Spring 2022 virtual Berman’s Call roadshow, we will take a look at periods of Fed tightening cycles and inflation and how to tilt your portfolios to get you through the period. Join us weekly (Thursday 7pm ET) through April 28th. Keep an eye on The Investor’s Guide to Thriving website for more information on how to sign up for notifications. The theme this year is Berman’s Call deep dives. More in-depth looks on combining fundamentals and technicals to mine for investment ideas. Should be a great series. If you have learned a few things over the years from our educational segments, please consider supporting one of my favourite charities. Dementia and Alzheimer’s research at the Baycrest Hospital/Rotman Research Institute is world class. Each year I raise money for this cause and match all BNN viewer donations. In the past 9 years we have raised almost $500,000 thanks to you. Please consider sponsoring here.