Going for Gold, but Not on the Podium

The World Gold Council mid-year outlook suggests that higher rates running faster than inflation hurt in the first half. Current expectations for real yields (inflation versus nominal yields) now suggest gold should be on the podium. That fact that gold is not shinning requires a closer look. Gold’s previous highs in 2011 were followed by more negative real yields in 2012, but not accompanied by new highs in gold bullion. This led to a major breakdown in 2013 when real yields turned positive. 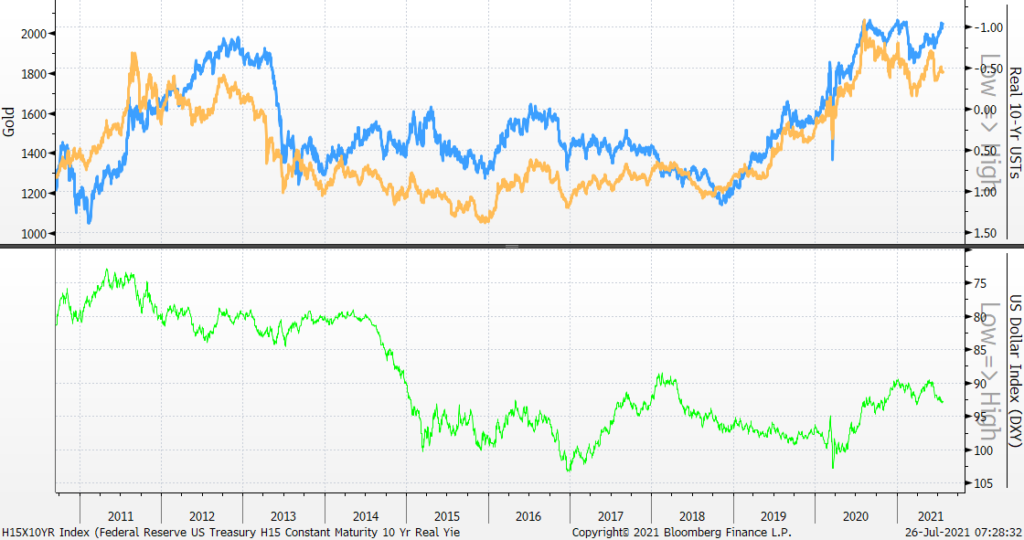 Interest rates are obviously a key driver. A negative real yield (after inflation) makes gold a compelling inflation hedge. There is a very good case that we see a stagflation environment in the coming years. Higher inflation costs and weak growth should keep nominal rates capped and real yields very low. That seems to be what the bond market is telling us today. This is a bullish environment for gold.

A big concern for gold would be to see nominal bond yields rise because of bond supply issues. This is likely a factor for the coming months as the FOMC contemplates tapering. We do not expect any guidance at this week’s meeting, but the market is focused on that announcement coming out of the Jackson Hole Fed conference at the end of August. August and September also sees about $340 billion more debt issuance than the current purchase rate of the Fed. We expect the Fed to taper, but they will eventually need to keep monetizing debt given the dire outlook for deficits. This should make gold a buy on dips for sure, but it not a clear picture.

The other big factor for gold is the value of the US dollar relative to other currencies. That was likely a big driver behind June’s poor gold market performance according to the WGC.

Gold still makes sense in portfolios, but I’ve lost some confidence here and recently reduced my exposure in the portfolios I manage. I’m not bearish. But gold has lost some luster for me and if the increase in negative real yields can’t boost the sector, it may be a while before gold takes the podium again.