Rosenberg Outlook for 2019: Are We Already in Recession?

It’s been a while since I have had @EconguyRosie (AKA David Rosenberg of Gluskin Sheff) on the show to get his outlook on markets. I’ve been a follower of Rosie since he was the Chief Economist for Merrill Lynch 20 years ago and I was at a competing firm CIBC. Rosenberg is one of the best “forensic” economists on the planet. Today we are going to look at the economic and market behaviour outlook for 2019.

Nobody seems to see recession as a plausibility for 2019. Even the bears say it’s 2020. Yet — one part of the bond curve (2s/5s) is within 3 bps of inverting, suggesting it could come sooner, not later. pic.twitter.com/dUXgQgp3v7

Rosie believes we have at least one foot in the recession already.

Over the weekend, the worst-case scenario did not play out and markets are cheering the 90-day truce between the US and China on trade. Rosie has been discussing the slowing impact of trade policy, inflation pressures, and world equities since Trump first put tariffs on washing machines and solar panels in January 2018. Let’s have a look at world market performance YTD. 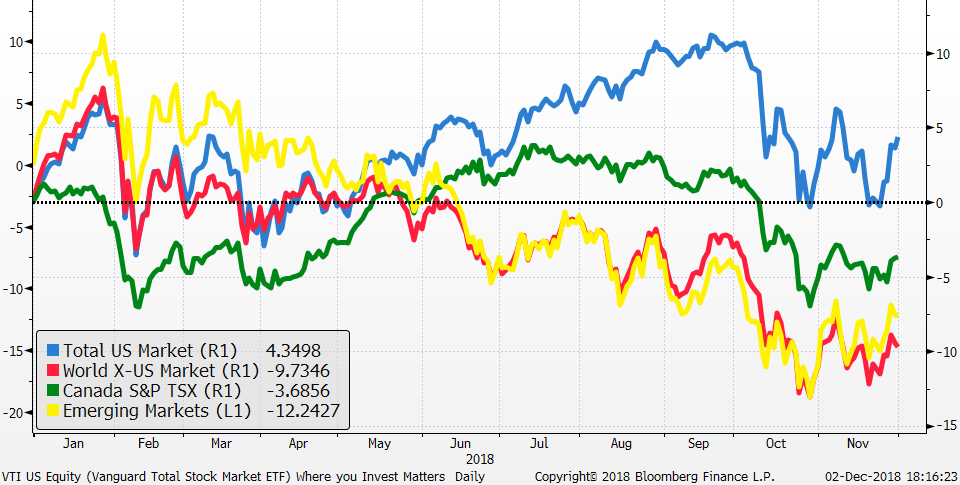 Rosie is a big fan of Bob Farrell and his famous 10 market rules:
https://www.investopedia.com/articles/fundamental-analysis/09/market-investor-axioms.asp

Market breadth (the number of stocks going up versus going down is a huge factor. Many investors are “Dow-obsessed,” following with trance-like concentration every zig and zag of that particular market average. And while there’s much to be gained from a focus on the popular averages, the strength of a market move is determined by the underlying strength of the market as a whole. Let’s look at the number of stocks that are above their long term trends in the Bloomberg World Index: 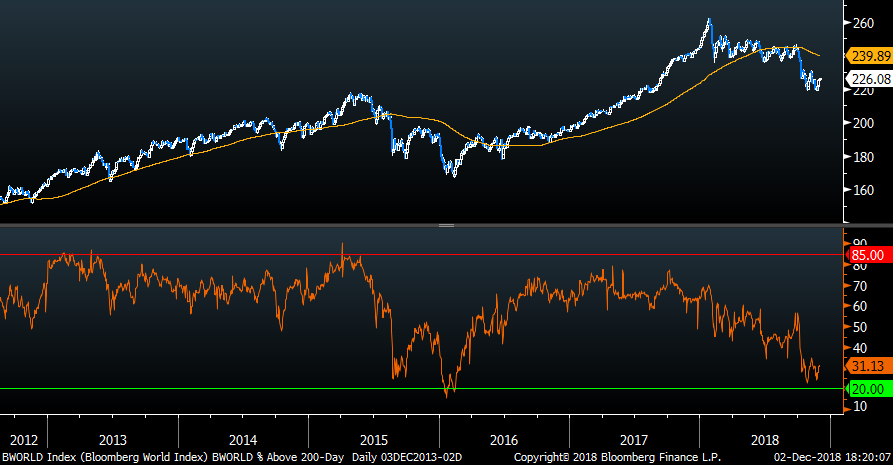 Market breadth has been weak all year and would suggest like in 2015 and 2016 that the average stock is in a bear market. So does it recover from here or is it going to get worse? That will depend largely on the tightness of monetary conditions.

Rosie has also opined that Canada is cheap, but what releases the value? My call is that Canada stays cheap depending on if we can get enough pipeline capacity to improve the output of our largest export.

For those that could not come out to our live events, we have scheduled a final webinar on Tuesday December, 11. Tune in and find out how to profit while protecting in the longest bull market of all-time, where I will look at some of my top sector ETF picks for the next few years and teach you how to build balanced portfolios using less risky options strategies that should work better for you in the next few years of difficult markets. Click here to register for free.