The Bond Vigilante is Back

The Fed’s balance sheet is massive. The central banks of the world will most likely win the short-term fights in this day and age of unlimited money printing. Recent action in the bond market suggests we may see a knock down battle at the O.K. Corral in the coming months. The bond vigilante has been absent for at least a decade with deflationary forces being very powerful. A bond vigilante is a bond market investor who protests monetary or fiscal policies considered inflationary by selling bonds, thus increasing yields. The question will be: Is the Fed’s balance sheet really UNLIMITED? Bitcoin investors think so! When investors perceive that inflation risk or credit risk is rising they demand higher yields to compensate for the added risk. The term refers to the ability of the bond market investors to serve as a restraint on the government’s ability to over-spend and over-borrow.

When we look at the 40-year trend in falling rates, we are dumbfounded by those calling it over. That is impossible to do from our perch given this long-term chart. The trend of lower yield lows and lower yield highs is still WELL intact. To see the end of this trend, we would need to see a sustained 10-year yield above 3.50%. The last time the Fed started to raise rates in 2017, they had to cut them back to zero as the economy simply cannot handle the higher rates. Equity markets collapsed in Q4 2018 and forced the Fed to reverse their tightening cycle. Equity markets DO NOT LIKE HIGHER YIELDS. 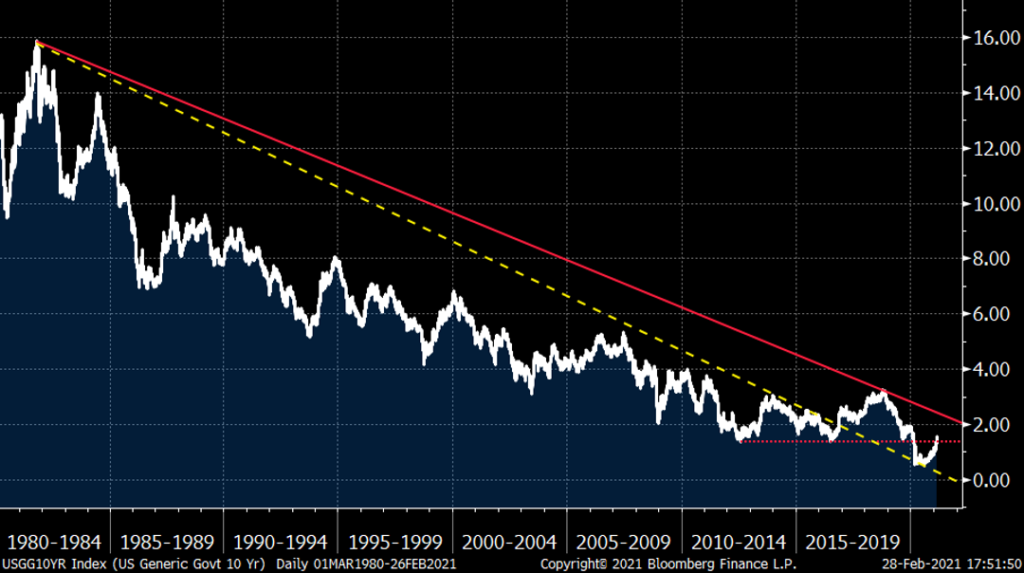 “As for the super-leveraged U.S. economy, it has never before been so susceptible to shifts in the interest rate landscape, as each 100 basis point back-up now siphons $800 billion, or 4% of GDP, into incremental debt-service charges.”

The history of yield curve control is notable in Japan and in the US After WWII ended. In what is very obvious today, President Harry S. Truman (read Biden today) and his treasury secretary (read Yellen today) still favored a policy that could stimulate the economy. However, by 1947, inflation was over 17%, as measured by the year-over-year percent change in the consumer price index (CPI), so the Fed ended the peg on short-term rates in an attempt to combat developing inflationary pressures. The stock market is sensitive to inflation pressure.

Yield curve control is a more formalized type of QE. Japan officially embraced this a few years ago by saying they would buy all bonds in excess of a certain yield. The interesting thing is that they ended up buying fewer bonds. The peg on longer-term rates contributes to faster money growth and increased inflationary pressures. By 1951, annualized inflation was over 20%, and monetary policymakers insisted on combating inflation. Against the desires of fiscal policymakers, interest rate targeting was brought to an end by the Treasury-Fed Accord in March 1951. 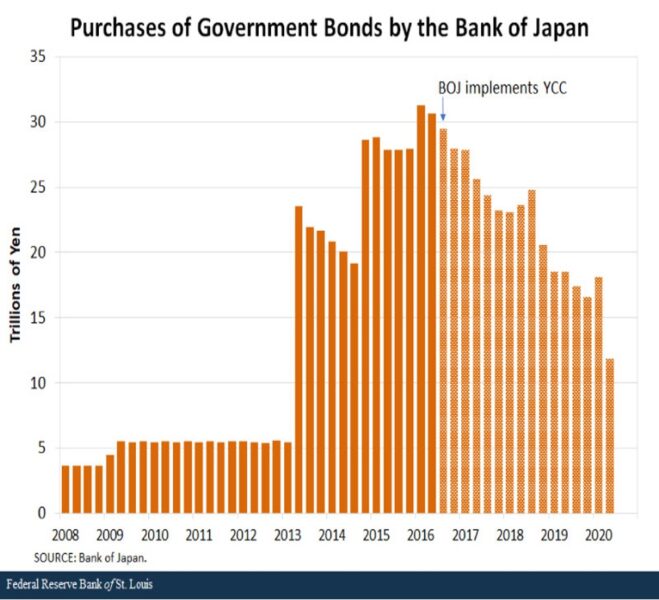 We believe that the central banks seeking inflation is a double-edged sword. I do not see a viable path (happy to debate this) where the central banks can do anything else buy monetizing future deficits. They simply cannot afford to see higher rates. While it’s true that inflation pressures suggest a strong economy, which will help fiscal balances, the natural rate of growth is simply too low given the demographic challenges ahead. Look for the bond vigilantes to stress test the central banks of the world, which likes keeps equity market volatility high. It is widely acknowledged that equity markets are trading at such high multiples because rates are low. Managing inflation expectations in the coming years will be critical for market stability. The bond vigilante will most certainly give the central banks a test and we think the next step for central banks (when Powell says they can do more) is yield curve control. We saw the Australian central bank (RBA) begin to signal yield curve control over the past week by committing to buy long bonds. To basically prevent rates from rising. That may bring some unwanted inflation over time if fiscal policies remain hot. Most think the economic output gap is too wide to see much more than transitory inflation as the Fed calls it.

Our Spring weekly Berman’s Call virtual roadshow is back. Register a www.etfcm.com or at www.investorsguidetothriving.com  The format this series will be a 30-40 minute weekly presentation that changes each week to current market developments and a 30-40 minute Q&A.

One thought on “The Bond Vigilante is Back”