It’s not real. The market has no true price discovery. We really don’t know what things are worth if the central banks were not printing money. Federal Reserve Chairman Powell told us this week the FOMC expects to keep rates near zero for a few more years (or longer) and discussed yield curve control. We wrote about this a few months ago here. We’ve been concerned about this for years. The problem with low rates stimulating investment has many issues. One of the biggest is the negative impact on retirement accounts and pension funds. That vast majority of pension funds in the world are grossly underfunded. The safe retirement income from bonds is almost non-existent. It forces impairs a safe “sleep-at-night” retirement income. The idea behind keeping rates low to stimulate demand is flawed. It’s not wrong, it’s flawed—seriously flawed. It has caused a gross misallocation of capital. There are too many companies today that only work because rates are being artificially held low. There are no longer any free markets and price discovery. The Fed owns just about everything related to debt markets or say they will. The fact that markets cannot function without the unprecedented support, is not a plus. It’s not a signal that the economy was fine before COVID-19. Yeah, I know, Larry, stop fighting the Fed.

The next biggest impact of a flat yield curve and low rates hits the banking system the hardest. Net interest margins are the profitability of the banking system. Banks borrow short-term and lend longer-term and their profit is directly linked to the steepness of the yield curve. While it’s true that in Canada, our banks are (or have been) better managed, the low rate environment and flat curve is now here. The Bank of Canada is printing money too. It first hit Japan, then Europe, then the US and now Canada and points you towards where the trends are heading. Have a look at the returns from the banks in Japan, Europe, the US and now Canada. 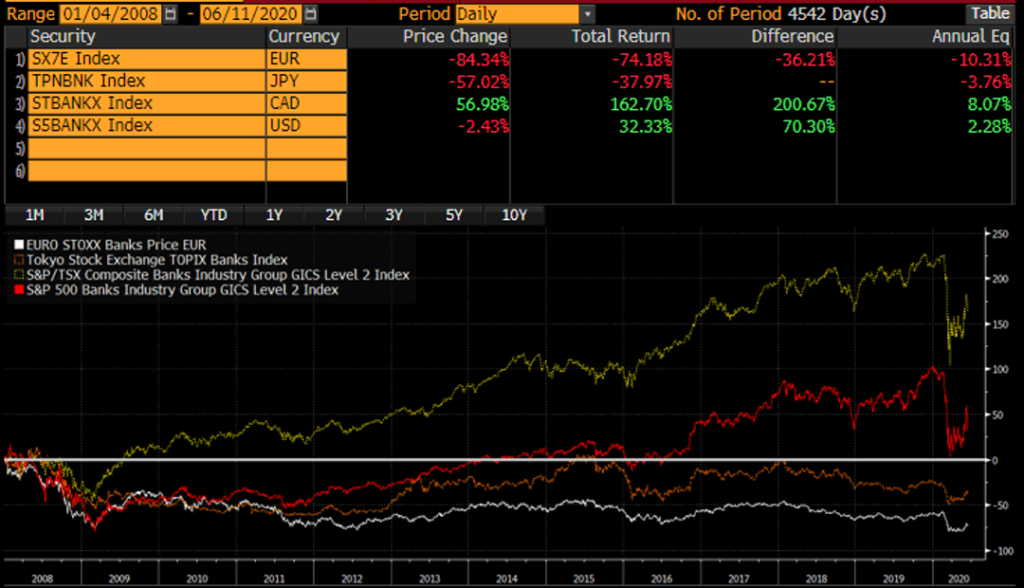 The “indirect” financing of government largesse by the central banks of the world is a huge problem. Flat yield curve and forcing rates down so that we can issue more debt is simply not structurally bullish. I really hate being a bear on this topic, I do, I like to be optimistic in general. But any way you slice it, we are heading for a day of reckoning. We can’t get out of this cycle of low rates and if we see the political shift even more to the left in an effort to address the gross inequality of many policies, we will be faced with a major cycle of stagflation. You cannot have a healthy economy without a healthy banking system. In most places in the world, the banking system is fragile. The worst economic shock to the world, perhaps ever, will simply not end in a “V” despite all the largesse and money printing.