Outlook for 2023: More of the Same to Start, but an Investable Low is Likely

For global equity markets, 2023 promises more of the same as the central bank narrative on tamping down inflation remains a top priority. The focus of central banks for most of the year will be to kill inflation. Unfortunately, that likely leads to a recession in most economies. This outcome unfortunately is not priced into earnings estimates. One would think the market understands this, but from our lens, it’s clear it does not. The table shows the bottom up estimates that Bloomberg compiles. 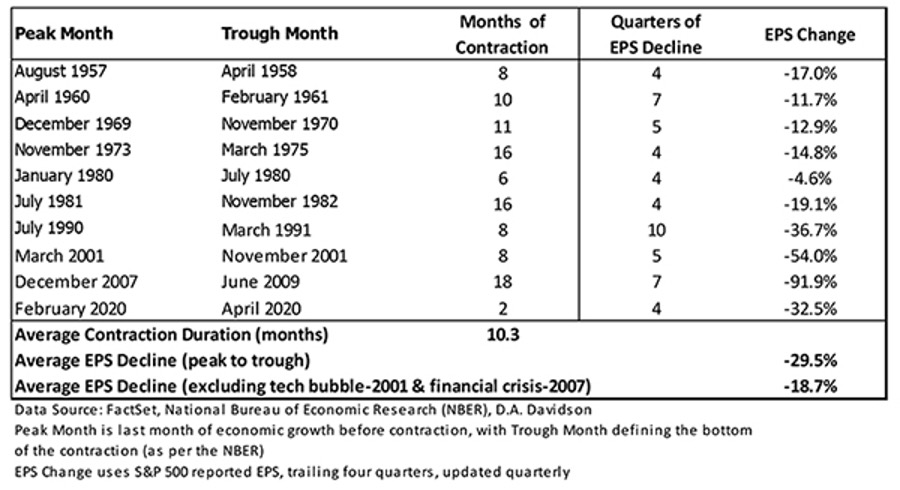 The odds of seeing earnings growth in 2023 with the highest recession probability in decades seems ridiculous. This means companies have yet to tell analysts that their outlook has changed. This should happen in the coming months. We’d be shocked if it did not. The Street is using high nominal growth (due to inflation) as justification for higher earnings, and there is some support for that, but they also expect near record margins, which are likely completely off the mark. 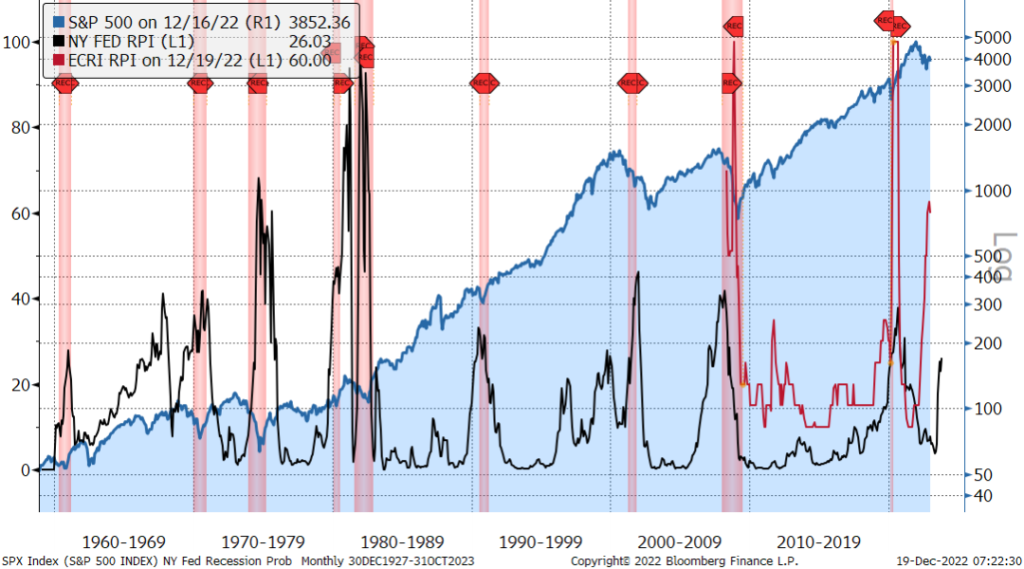 The other major complication in an equity forecast are interest rates and the cost of funding the massive debt. The outlook here is not encouraging and higher for longer to kill inflation makes it worse. In the next few years, the US needs to refund over $10 trillion at significantly higher rates. This will begin cost the government over $1 trillion per year ($400B more) and will crowd out discretionary spending. The fiscal debt problem is massive and will be a major growth headwind (forever). This is one HUGE reason they need to kill inflation today. Higher rates are toxic for growth and debt service costs. They will ultimately have to monetize (more QE) the debt over time, but it will likely fuel inflation and this lever is not likely available for the next few years. It’s a problem for another day.

Look for yields to remain elevated and do not expect a rate cut in 2023. The combination of recession where the central banks and government have difficulty stimulating would be another headwind for asset prices in general. If the recession is deep, we could see rates come down towards 2.00%, but it will depend on core wage pressures. Less globalization is inflationary and this dynamic will likely take the next decade to rebalance. It means far less labour productivity globally (we need more workers globally to produce the same output). 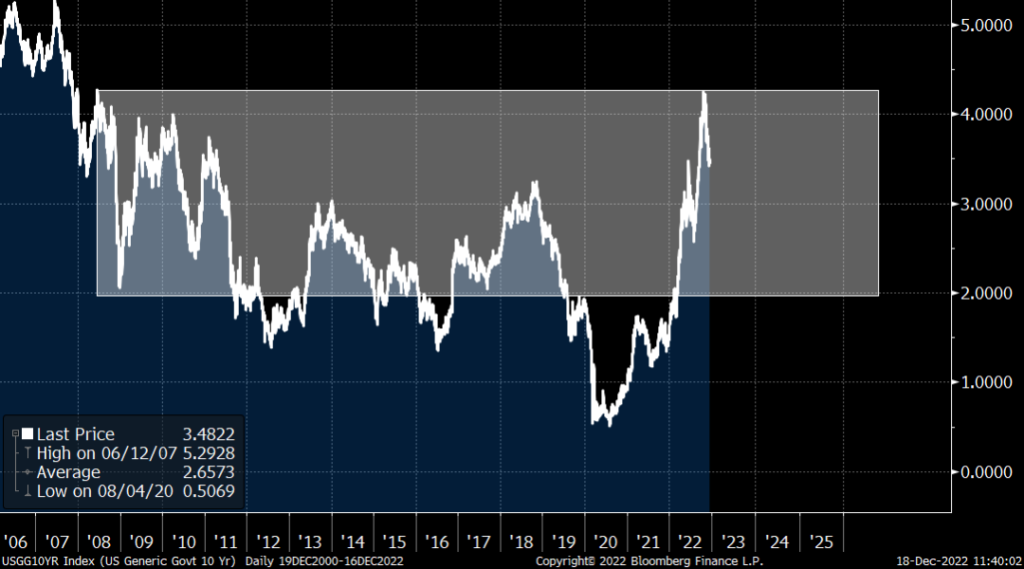 When we talk about relative interest rates between countries, we have to look a currency rates. The Canadian dollar is largely driven by two factors. Balance of payments in the current account and the capital account. The current account is basically a net trade factor. For Canada, energy prices (purple line) are a main driver. And relative interest rates (green line) tend to attract foreign capital flows. For now, these currents are offsetting somewhat. A less hawkish BOC with higher energy prices. We expect that US rates will remain higher than in Canada for the next few years and that will bias the Canadian dollar capital account flows towards weakness. But better terms of trade with higher average energy prices, will bias the current account stronger. However, as a global recession plays out, it will be tough for oil prices to rally. I understand the longer-term narrative around the under investment in the sector keeping oil prices elevated. We agree, but we live in a relative world. If it were not for the Russian war and ESG considerations, WTI would likely trade back to $30-40 in a global recession. Prices are here ($70-80) because of these factors. They do not mean $120 plus like some are suggesting. We think peak demand will come far sooner than ESG and OPEC plus dynamics play out. Also, and a very big ALSO, the world just does not work well with high energy prices. Happy to take that debate with anyone. 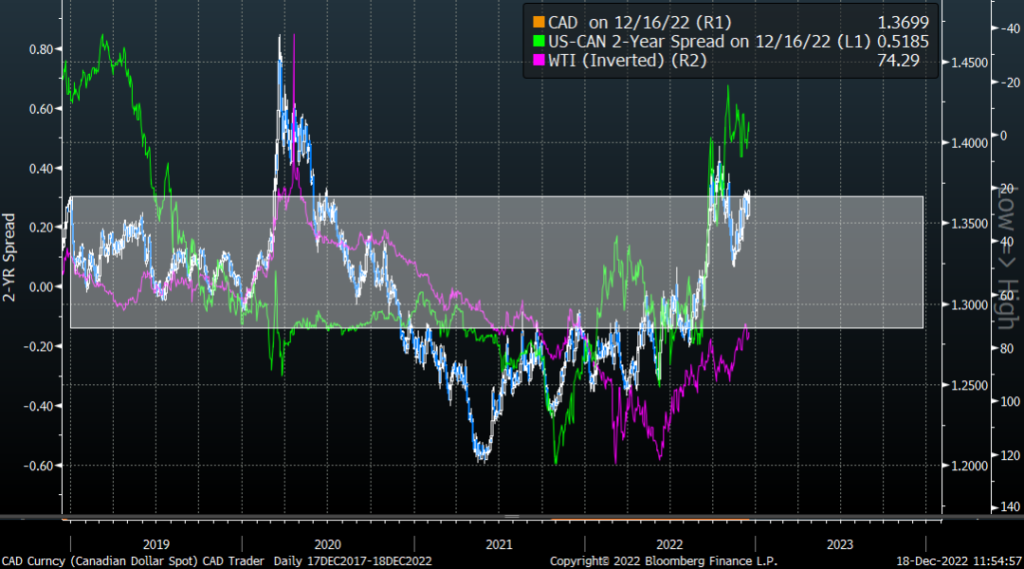 Have a Happy and Healthy Holiday season and New Year! If you have learned something this year to help your portfolio, please consider joining me in the fight against Alzheimer’s and Dementia by making a donation. In the past decade, you have helped raise over $500,000. I will match all BNN viewer donations up to $25,000. Berman’s Call will return in its new format Monday’s at 4:30 on February 13th 2023.