Powell’s Dovish Hope for Soft Landing is Not Realistic

The lower part of our featured chart shows the US 3-month versus 10-year yield curve (left side scale). When some economists are trying to forecast a recession, the relationship between funding rates and lending rates (the yield curve) is a major factor. When this yield curve inverts, it has always forecast a recession within 12 to 18 months in the post WWII period. The top part of the chart shows the monthly peak to trough drawdown of the S&P 500 (red) and the peak to trough drawdown in earnings per share (EPS) on the right side scale.

Powell told the world last week three things and none of them are new:

1. Higher for longer: He reiterated that the terminal rate is not as important as how long they keep it there to make sure core inflation is contained.
2. That it is time to slow the pace of rate hikes at the December meeting. A 50 bps increase was already fully priced in to the market falling to 25 bps at the subsequent meetings.
3. Headline goods inflation has likely peaked while wage pressures are continuing. That’s the part of core inflation they are focusing on.

However, the expectation from most market participants is that he would try to tamp down asset prices like he has done for several months that they believe contribute to easier financial conditions. This is where the market was wrong and why we saw such a strong move in all asset markets. Importantly, they did not correct the markets interpretation in the subsequent days as they often do when they believe the market response was not what they intended. This leads me and many others to conclude there may be a growing belief they may have already raised rates to much and hurt the economy. BUT the soft-landing narrative Powell suggested was possible is pure BALONEY.

The scenario where EPS do not decline in 2023 and actually grow like the bottom-up consensus believes is inconsistent with historical outcomes. The table/chart below shows the forward EPS for the S&P 500 broken down by quarter and the change over the past year. It has come down, but not likely anywhere close unless the soft-landing scenario plays out.

The conundrum investors will debate in 2023 is that a soft landing requires inflation to fall and employment not to fall (much) with the consumer being 70% of GDP. If core inflation is mostly about labour costs and expectations about future prices, we do not see that scenario is a likely outcome at all. Powell did say this, but markets chose not to listen. 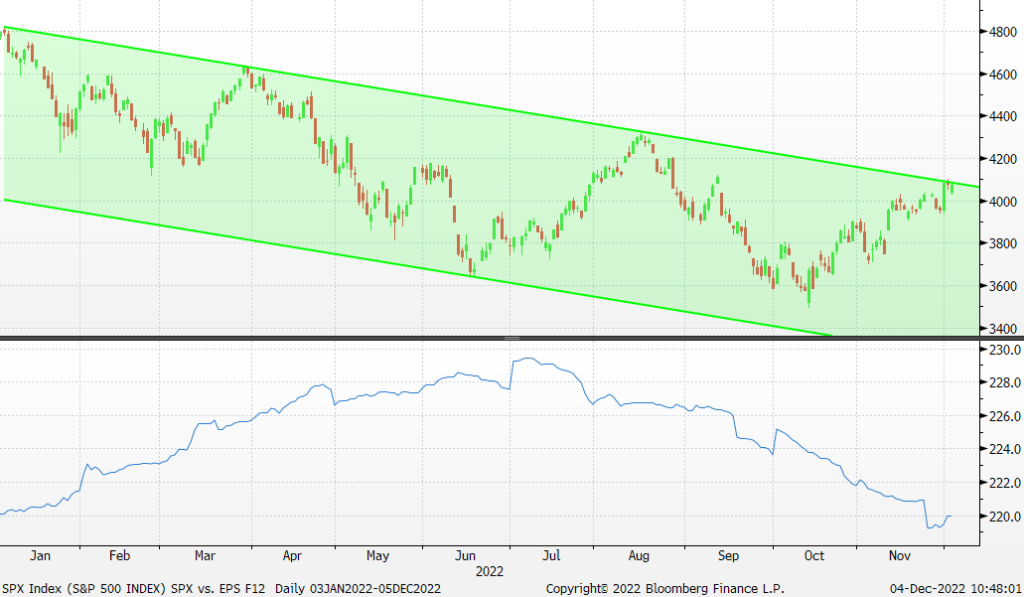 If a recession is the most likely outcome for 2023, then we should look at about $200 in EPS with a 16x multiple as a base case given what the yield curve is telling us. This suggests that we see a test of 3200 at some point next year. The market got excited last week about a pending pause and rate cuts in 2023, but our lens suggests that is not a high probability outcome.