The most frequent question I have received over the past few weeks of April has to be tied to the Fear of Missing Out (FOMO). What if the bottom is in? What if we make new highs? That has certainly been the conditioning for the past decade. By now all will know that April was the best month in decades. But it always had that possibility. Why? Because the best months follow the worst months and they are directly correlated to the magnitude and duration of the decline. It stands to reason that the biggest rally in decades follows the biggest decline in decades.

Our first chart this week is a monthly candle chart (shows open, high, low, close). When blue, the close is below the open; when white, the close is above the open. There has been no shortage of large white candles that follow large blue candles. I made it a logarithmic scale to show percentage moves versus price moves. A hundred S&P points is not what is used to be. When the S&P 500 bottomed in March 2009 at 666, 100 points was about 15 per cent, today it is a bit more than 3 per cent. 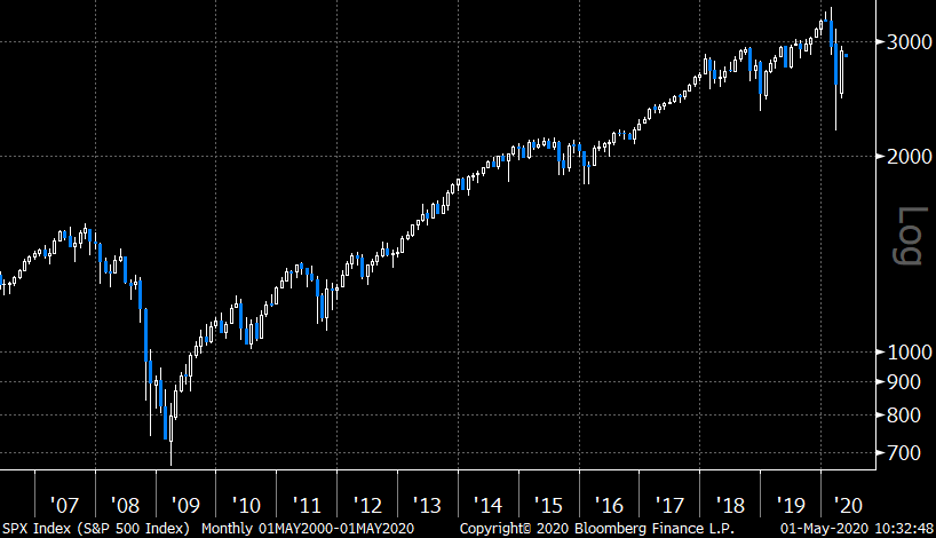 We just do not no when the reversal will start and we can never know this with foresight and clarity. That is the rub of the whole investment industry and why we are told not to time markets. Have you every heard that it is time in the markets that count and not timing the markets? Actually, it is emotional and that is it. Plain and simple. As someone who is good at the art and science of delivering sleep-at-night risk adjusted returns—I am telling you it is the most difficult thing to do. And what I have learned is that if you make your bets based on probability you can beat the average return per unit of risk over the long run. You can minimize (not eliminate) FOMO and recency bias. But what are the odds that the biggest hit every to the global economy is a more drawn out bear market? Let’s look at the monthly reversals in the 2000-2003 bear market. 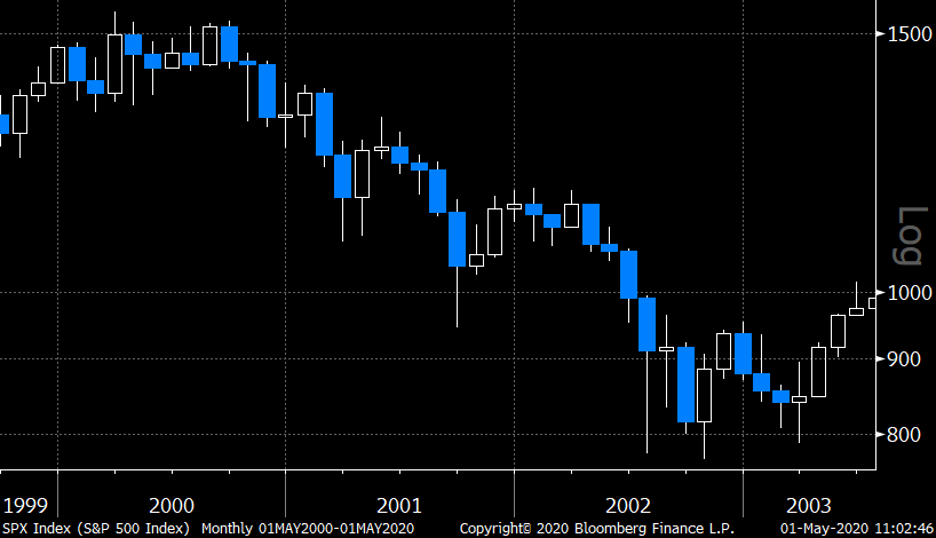 The market narrative is what people believe. It is the MOMENTUM factor. It is the FAST-MONEY factor. It is what the MEDIA has as the headline story. It is exciting. And it is the worst part of the recency bias effect and one of the biggest mistakes investors will ever make.

Almost EVERYONE says DON’T FIGHT THE FED. We know, because we know, that it is BULLISH when the Fed is easy. But we do not really know why. And that is the problem.

You also, no doubt, have heard the phrase the markets can be irrational far longer than you or I can remain solvent. Here too, this narrative, is all emotional.

Recency bias is an overweighting the HERE and NOW. WHAT CAN I BUY TODAY? IT IS FAST MONEY! The market is going up it MUST be bullish because markets are discounting mechanisms. YES absolutely, except for the narrative. We are overweighting the “V” we are seeing and we think that it now has to be a “V”. BUT IT (PROBABLY) CAN NOT LOGICALLY AND RATIONALLY BE A “V”… 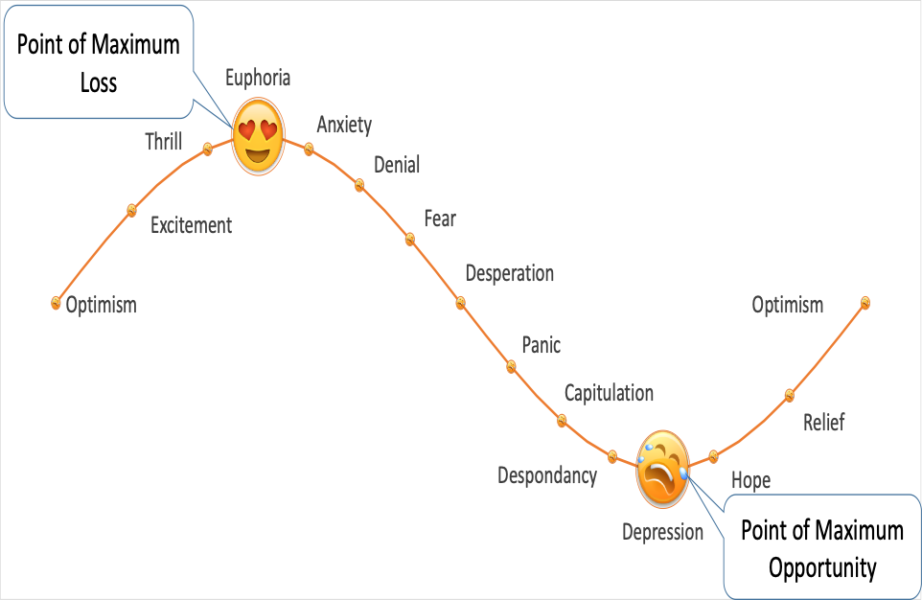 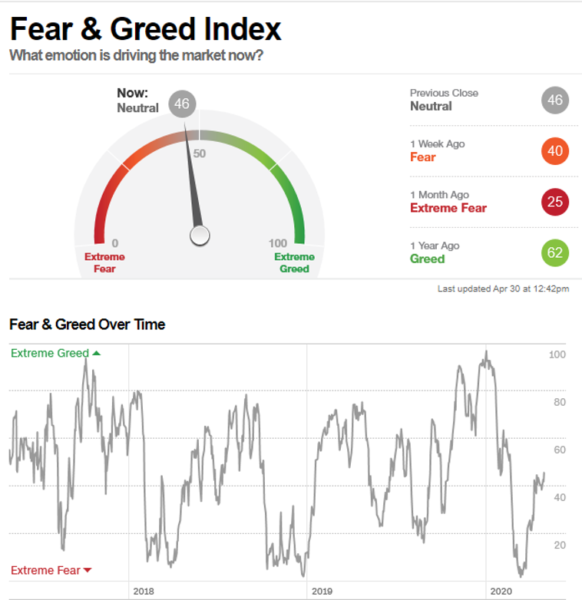 I always get asked what is in my toolbox and what are my favorite indicators. While my toolbox is a bit broader than the CNN Fear and Greed index, it can be that simple. When the market risk factors are high, take less risk. When they are low, take more risk. Buy low, sell high. We just do not know what those levels are because they are relative terms not absolute terms. Post WWII, in a recession, the S&P 500 historically falls 29 per cent. Statistically, we must be a buyer at this point. The only relevant question is how much should we buy?

In a Papa Bear, the average decline is 34 per cent per cent but there is a skew with some heavier losses when valuations are extreme when the recession starts. This bear market, before it is all over, will most likely be between 40-60 per cent from the pre-recession peak. How do I know this, because that is probably what happens. It has happened before. To think it is materially different is not playing the odds. We were buyers down 29 per cent and 34 per cent and now we are as hedged as we can be in all our portfolios. And we started hedging at much lower levels. Why? Because recency bias is your worst enemy. Why? Because the probability of this recession/depression, the worst economic shock we might every see short of a Mad Max nuclear holocaust, is probably not over. There is a scenario where I am wrong, but having maximum risk in your portfolio right now is FOMO and not rational cognitive consideration. It is getting caught in the narrative and not understanding the probability.

Please join Larry this week on his spring webinar series with special guest David Rosenberg of Rosenberg Research. Larry and David will discuss current market volatility, a forecast for recovery, and 10 trending topics our audience has been asking for. Anyone who attends this week’s webinar will receive a free month of Rosenberg Research. Join us Thursday, May 7 at 7:00pm EST. Please click here to register for free.