China vs. the U.S. in the Court of World Opinion: Is This a Trade War or a Cold War?

China’s desire to be the number one economy in the world started long before Donald Trump shook his finger at China. President Trump is a master at many things. He’s the best at fighting with people. By suggesting China lied to the world about COVID-19, the issue is now on the front burner and has turned up the heat considerably—this is hard to “walk back.” There is a not so perfect storm (in terms of its impact on the global economy) brewing. Trump is a master negotiator, so he tells us. He delivered the best economy ever, so he says. And the US does the best testing, and the most, more than anyone else combined, he says. Let’s not fact check those. He’s also a master at not accepting any personal responsibility. So it’s China’s fault for the rest of the campaign season. They lied to the world, he says. Here, I would have to agree. It’s not a new thought that China has been making up stuff up just like Trump has for decades. They are sympatico in that regard. I’m not sure we can believe much of the data they report. Yesterday there was 1 new case of COVID-19 in ALL OF CHINA? In any case, I don’t want to go down that rabbit hole too far, my dislike of the President’s style of governance is well known. I’ve been a bit of a China bull from a value investing standpoint—it’s fundamentally one of the cheapest markets in the world. So as a relative value investor it’s made sense. I’m not so sure it is going forward. I’ve spent most of the past month trying to figure out what the world looks like in the post COVID-19 world. This HOT/COLD war with China is likely a game changer. 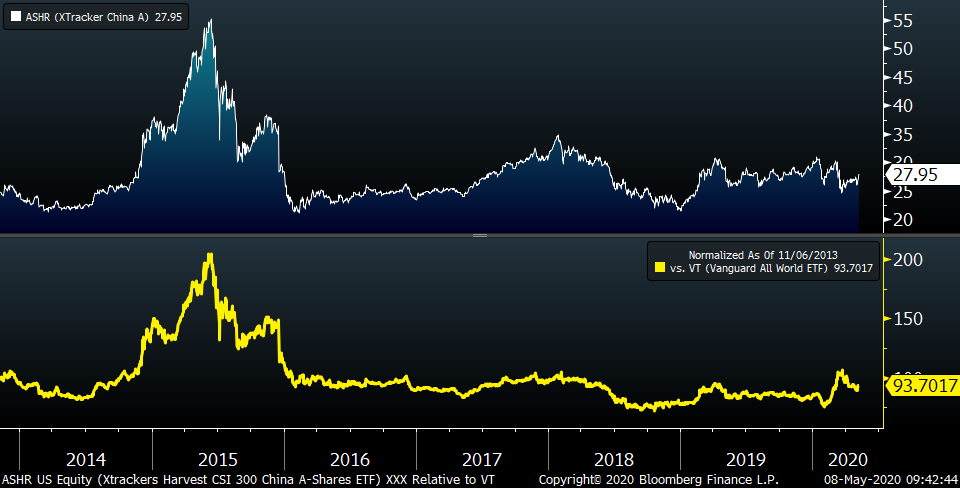 So the key question from an investment standpoint, because I believe this trade war is going to get HOT and COLD, does the West need China more than China needs the West? And is this the nail in the coffin for peak globalization (supply chains)?

Regardless of the vaccine or viral treatment for COVID-19, the war against China is heating up again. The interesting thing is the Democrats might be even more of a China hawk than Trump. They will likely just be statesmen about it. Costs will be rising once we get through the deflation hit from the COVID-19 demand shock. Supply curves will be stressed, and corporate profit margins will be squeezed. Of this we are certain. Simply, the bull market in globalization is over. Supply chains will be restructured in many industries. Donald Trump may get his walls after all.

The Covid-19 pandemic likely marked the start of a new cold war between China and the US. Prior to coronavirus, tensions between Washington and Beijing were rising.

The Financial Times reported: that the White House is interested in trying to nullify the legal doctrine of “sovereign immunity”, which protects China from being sued for damages in US courts. China has also contributed mightily to the rise in tensions. A Chinese foreign ministry spokesman, Zhao Lijian, has floated the evidence-free idea that coronavirus might have originated in the US. Beijing has also responded with unreasonable aggression to calls for an international inquiry into what is now a global disaster. When the Australian prime minister, Scott Morrison, called for such an inquiry, the Chinese ambassador there raised the idea that his country’s consumers might boycott Australian goods in retaliation. Chinese officials seem to be under instructions to try to extend their own censorship regime to the foreign media and even foreign governments, policing what can be said, and threatening retaliation against those who fail to comply.

These geopolitical issues are NOT priced into a market that only sees fiscal and monetary largesse. We all know, because we all know, not to fight the Fed. I hate the “this time is different” narrative, but there are secular changes, measured in decades, that can reverse the immense bullishness of the Berlin Wall falling. I was fundamentally very bullish on global growth in the late 1980s. Sadly, the peace dividend may be over. I’m worried about too easy money and negative rate policies too. More on that next week, in the mean time gold is a great hedge.