The Future of Money

In 2016, Sweden introduced the idea of creating a digital currency. Sweden’s central bank, the Riksbank, was the first central bank in the 1660s to issue paper notes. The amount of notes and coins in circulation had been cut in half globally in the past few decades with the advent of on-line digital e-commerce.

Most do not think about virtual currencies, but digital money actually exists today all over the world. When the central banks conduct monetary policy to control the money supply (including quantitative easing), they literally create an e-transaction when the member bank gets a deposit registered at the central bank while the central bank gets the physical security. When you look at the cash balance in your bank or investment account on-line, that is e-money. The bank does not actually hold the currency backing the amount that is there. We have had a fractional banking system for hundreds of years. Yes, there are securities held as reserves, but very little actual cash.

Bitcoin, currently the most famous cryptocurrency, is built upon a database protocol known as blockchain, which has become the technological darling of commercial banks around the world in the past few years. Read the future of financial infrastructure here. The benefits for governments are monumental, specifically in two areas. Counterparty risk reduction and fraud minimization.

The Federal Reserve Bank of St. Louis put out a paper earlier this year that discussed the difference between a central bank issued e-currency and truly decentralized permissionless cryptocurrency like Bitcoin and some 1500 others floating around. You can read the full report here.

Interestingly enough, with Europe moving through their financial crisis and moving into a period of negative interest rates (that’s when you have to pay the bank to hold your money), the demand for holding the paper increased significantly. The bottom line is that there is obviously still a need for physical paper and coin in the fiat world and they will not be eliminated overnight. But we are moving in this direction to be sure.

Some conclusions from their research:

1. Use of cash is inefficient and significantly more expensive than electronic 2.
2. Cash promotes crime and facilitates money laundering and tax evasion.
3. Cash hinders monetary policy by limiting the central bank’s ability to use negative nominal interest rates as a policy option. 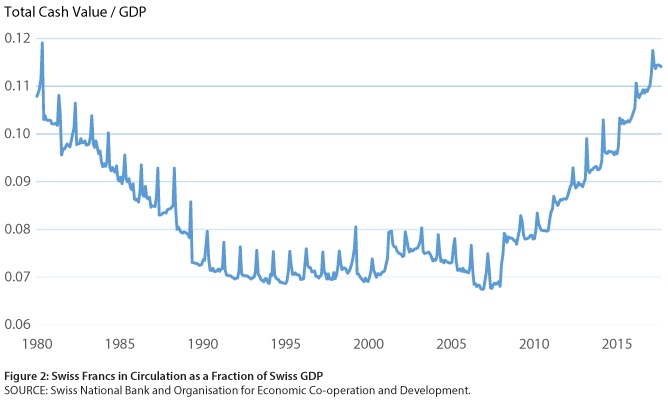 If you are betting on a world of decentralized independent cryptocurrency you probably will not be on the winning team in my humble opinion. There are far smarter people than I, betting that they will be a major part of the world. To me, it’s fraud minimization and anti-money laundering that will be key to legislative governance in this area. This makes the decentralized world less likely.

A friend of mine owns a company that was hacked by a cyberthief. They encrypted key files and demanded payment to unlock them, that payment was to be made in bitcoin. The regional police here in Ontario said there was nothing they could do. Let me repeat, THERE WAS NOTHING THEY COULD DO! This is the reason why Bitcoin and others will eventually be legislated away into payment systems or some other technology like paypal or something we have not thought of yet. The reduction and elimination of terrorism and criminal activity along with effective taxation will be at the core of the future of e-money.

I see a future where all financial transactions are taxed at source. Let’s face it, the governments of the world are broke. They have borrowed so much money and have been fiscally irresponsible, specifically in the past decade. I hope that changes one day too, but I doubt it. Here’s a favourite quote of mine by a truly independent Libertarian thinker:

“The American Republic will endure until the day Congress discovers that it can bribe the public with the public’s money.”
― Alexis de Tocqueville

I would love to believe we go into a world where that was not the case, but I do not see an easy way out of the massive debt problem the world has. There is double the debt in the world today as there was prior to the Great Recession. At least in my lifetime, the demographics of the world will not allow us to grow/inflate our way out of it as that is the common economic solution. One scenario is debt monetization (permanent QE) sort of like what Japan is doing. However, if governments were to be able to tax the grey economy, they could reduce overall tax rates and improve compliance (broaden the base, lower the rate) overall and possibly begin to reduce the debt burden on society. E-money and technology are at least a major part of the solution. We are almost there already in terms of paying for things with our phones and tapping for things with our cards. I’d be willing to bet this will take another 20 years or so, but it’s starting now and it’s very exciting. I see a world with electronic money and make no mistake, Governments will control it!

The speculation in Bitcoin and other cryptos are people guessing who/what technology will be the winner. It’s not unlike the dot com companies that were popping up all over the place in the late 1990s, most of which do not exist today.

We are in the final weeks of our current seminar series. Come out to one of the events and learn about what ETFs can help your portfolio with the uncertain economic backdrop over the next few years. Register free by clicking here. We ask BNN Viewers to make a voluntary charity donation to support Alzheimer’s research at Baycrest Hospital or Cancer research at the Hospital for Sick Children.