When Consumer Confidence is This Weak, History Says We Are in a Recession

There was a chart making the rounds last week put out by JP Morgan prior to the absolutely terrible University of Michigan Consumer Sentiment numbers that came out Friday. The official government numbers from the Conference Board are not nearly as dire. Sentiment levels have rarely been this bad. It speaks to the level of artificial government support for the economy that has exasperated the gross misallocation of capital. Inflation risks now stress the ability of policy makers to respond as they have in past cycles. Very few investors/consumers today have experienced this level of inflation stress before. I’ve been an investor for more than 35 years and I have not seen it. I do remember getting some double digit high yielding Canada savings bonds in the 1970s as birthday gifts in my early teen years. 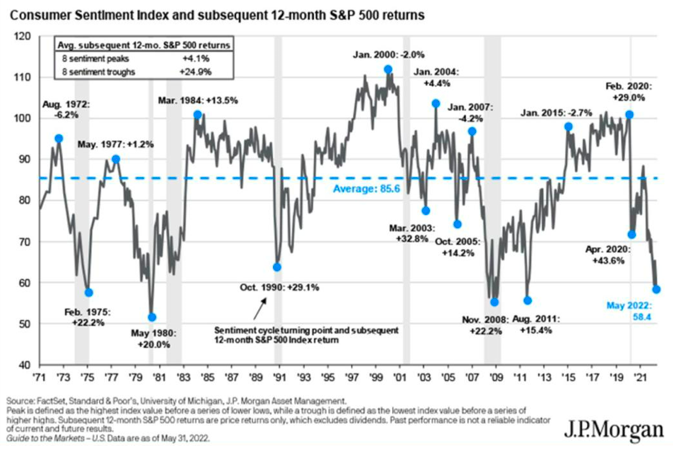 With past cycles we know that the recessions killed inflation pressure and central banks and governments had the ability to deficit spend and cut rates to stimulate. There is not much appetite or ability for those policy levers today with inflation running hot and the US government in the heat of a major mid-term election. This cycle is much more complicated for these reasons and should be more elongated than in the past. Possibly, but not certainly, like the early 1980s double dip recession. It may take a while to get inflation back to the 2-3% range with less globalization, more onshoring of supply chains and generally harder to find skilled labour. Market based pricing for long-term inflation remains well contained as we can see in the swap market.

It’s not too surprising that asset markets are not happy when inflation pressures are not moderating as widely expected (including us). But as the FOMC well knows and many have opined, you can’t print oil, wheat and skilled labour to fix the supply side stress feeding the inflation pressure today. Nor can you stop the Russian massacre of Ukraine. These near-term pressures have not filtered into longer-term expectations, which is encouraging.

We think that the continued rise in bottom-up earnings expectations are the conundrum here. While equities are a nominal asset (revenues rise as prices rise), margins have yet to eat into profitability. In mid July, we get Q2 earnings and typically a few weeks before we would get earnings warnings. If we do not see them, we would likely see a major short covering summer rally. If we do, how much of it is already been priced in?

If we get a multiple contraction towards the longer-term average of 17x (adjusted for interest rates), and earnings fall the typical 10-15% in a recession, 3300-3400 seems like a range of good valuation support. I do not think we see those levels until we see confirmation that earnings outlooks are being ratcheted lower. That could happen for Q2 earnings, but the Fed just started to raise rates and it takes longer for the transmission of monetary policy to work into the economy.

But it’s clear sentiment is beyond bearish and that will change consumer behaviour to come. We can see oversold rallies, but none of them will likely stick until inflation is under control and confidence returns. That could be a long way off considering the restrictive part of the cycle has just started. Don’t go out and panic and sell everything. Markets will likely be choppy and there are opportunities for traders. However, it’s probably too early for investors to get bullish and look for a major bottom just yet.