How High Can The Market Bounce?

In looking at how high the market can bounce here; we should look at the potential of the technology sector that has been leading the downside. We saw a ferocious rally in March (about 17%) before the 200-day average turned the QQQs back. While the QQQ is not all technology, it’s the most widely understood and trade technology index. This time, the 50-day average might be strong resistance along with the post FOMC highs from early May around 330. Perhaps not surprisingly, that’s also about a 17% move off the recent lows. The series of April lows around the 38.2% retracement held the market in March before giving way in May. The NASDAQ 100 (QQQ) held the test of the 50% retracement last week at the same time the S&P 500 tested its 38.2% retracement. With this lens, the market is observing and respecting several key technical points. It may not be a coincidence that the FOMC trotted out the most hawkish member Bullard last week around the precise test of these key levels to walk back the tightening cycle and put a 2023/24 rate cut on the table. WOW! They just started to tighten and fight inflation they thought was transitory, and already they know they may have to ease next year. All rate hike cycle are themselves transitory. How fragile are the global capital markets? The sheer amount of structural debt and leverage in the system will not allow higher rates. So what happens if inflation is stickier than most believe? Time will tell, but it cannot be good for asset prices in general. 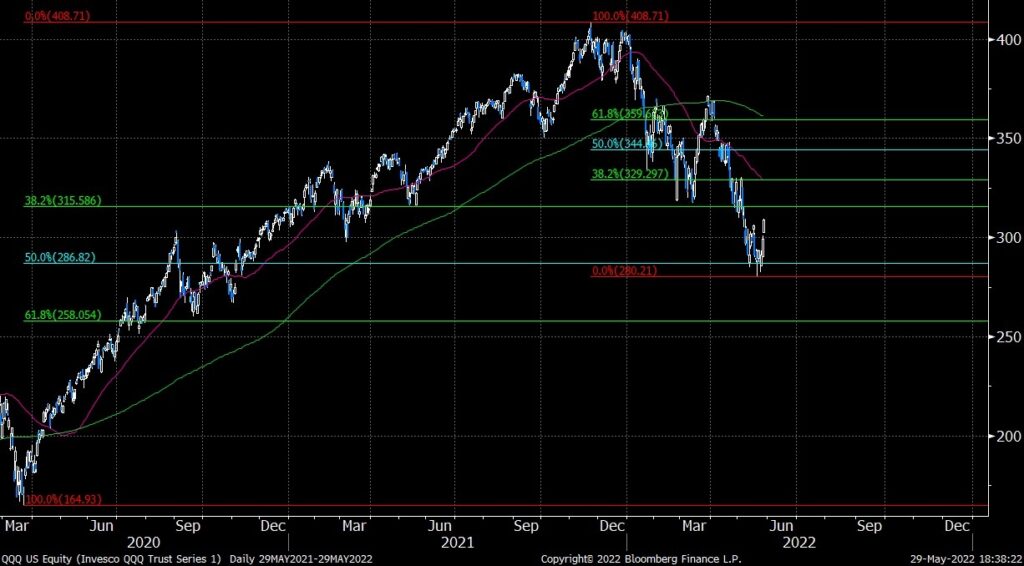 The next aspect of the bounce potential is timing? One thing we learn in technical analysis 101 is not to try and predict price and timing in the same forecast. But here we go. The primary reason for the market to pause its bear market correction here is that inflation pressures are likely to begin to moderate and thus the FOMC will not have to be as aggressive as the market feared. We believe the FOMC will likely cause a recession here and will not be able to generate a soft landing. That’s been their long-term record and this cycle is as difficult as any they have seen and more QE to stimulate will not likely be politically palatable if inflation runs at an elevated level for longer than anticipated and Congress is controlled by the Republicans in 2023. The market expects the FOMC to raise rates 50 bps at each of the next 2 meetings and then slow to 25 bps increases thereafter. The table shows what is priced into Fed Funds interest rate futures markets. 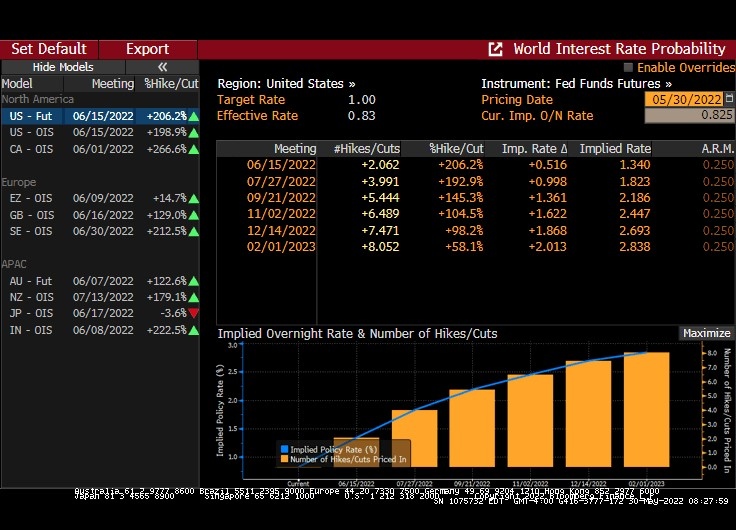 So markets will likely stabilize through the July 27th FOMC as that is priced in, but if companies take earnings outlooks significantly lower for Q2 and looking forward, the bounce likely starts to struggle after the June 15th meeting and companies get better visibility on their outlooks. 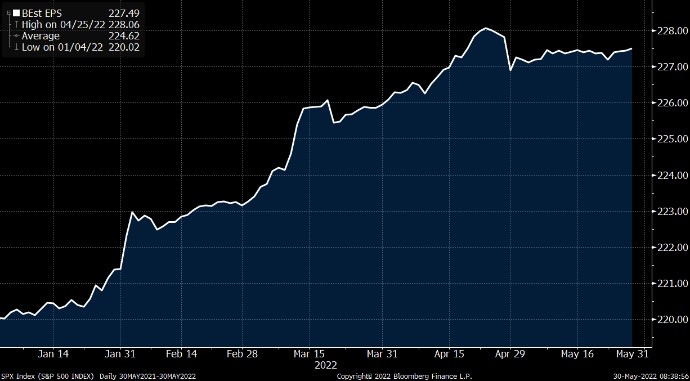 Looking at the 12 month forward expectations, we can see the past month or so has seen the outlook flatline. But looking out a few years, a recession is not even close to what expectations are. That’s where the risk seems to be.