Janet Yellen will spin her Fedspeak on Aug. 26 at the annual Jackson Hole conference. Investors worldwide will scour the text for hints at what the future holds. In the past, Federal Open Market Committee (FOMC, a.k.a. Federal Open Mouth Committee) bosses have used the speech to alert the market to a change in policy. The most memorable was Ben Bernanke announcing QE2 (Quantitative Easing 2) on Aug. 27, 2010. There is no expectation of a QE5 – or whatever number we are at now as I’ve lost count – speech this time around; in fact, quite the opposite. When will the Fed raise rates again?

There has been a gaggle of Federal Open Market Committee (FOMC) members opine that the market is not properly pricing the risk of a rate hike this year. The market reaction last week after July FOMC meeting minutes seemed to suggest no rate hikes were likely this year. The latest and most influential to opine is the Fed’s Vice Chairman Stanley Fischer. He suggested that the Fed’s economic goals are close to being met. The first chart shows the odds of a rate hike at the September meeting is only 26%, but that is up from 22% on Friday before Fischer’s comments. Odds of a December rate hike is now 54%.

Conventional wisdom suggests Ms. Yellen will be cautious as it has been her modus operandi since she took over from Mr. Bernanke in January, 2014. She will probably attempt to play the Goldilocks card – not too hot, not too cold, we’ll decide when to move rates when it’s just right, whatever that means. But maybe, just maybe, she will tilt the deck toward the possibility of a September hike.

Market pundits often suggest that the Fed does not want to interfere with the U.S. election so they would look to wait until after November 8th to move rates. History actually refutes that notion. They actually have moved rates in both directions in front of an election. In 2008, they cut rates twice in October in the wake of the post-Lehman volatility. They also tightened rates a few times in the months before the 2004 election.

Wages are rising and global markets are strong right now – these are two of the things that have kept them (the FED) on the sidelines in the past. While inflation is lower than their 2% desired target, so too is GDP lower than they would like to see. Truth be told, they will never likely get the perfect Goldilocks opportunity in this macro economic backdrop—there will always be something they could find to stay on the sidelines.

I have suggested for several years that interest rates may need to stay near zero for decades to help the world grow out of this debt-fuelled, demographically challenged conundrum. I have written in recent weeks about the challenges to monetary and fiscal policies against the headwind of debt and demographics as to why I’m defensive in my client portfolios. This question of interest-rate “normalization” will probably be an ongoing narrative in markets for the foreseeable future.

Historically, when you want to reduce the volatility risk in your portfolio, you would increase the amount of fixed income (or cash) relative to the more volatile equities. You would also shift portfolios to less volatile holdings such as utilities, consumer staples and high-dividend payers like real estate investment trusts (REITs). With bond yields so low and interest-rate sensitivity so high, they do not offer the same protection they have historically. This week, former FOMC boss Alan Greenspan opined that the committee would be raising rates soon and perhaps far more than the market was ready for.

The FOMC (when under Bernanke) first mentioned starting to normalize rates in May of 2013 and it was followed by a market event dubbed the “taper tantrum.” The market was not ready for a rate hike and everything interest-sensitive sold off hard for a few months. The most at risk are the overvalued utilities (ZUT, XUT) and REITs (ZRE, XRE, VRE, RIT), which took the brunt of the selling pressure. The yield on five-year Canada bonds went from 1.15 per cent to 2.15 per cent, which saw short-term bond funds (like ZCS, XCB) fall about 2 per cent, wiping out a year’s worth of yield.

Of course, they never actually increased rates for 2.5 years (until December, 2015) after first warning the market. So all these exchange-traded funds (ETFs) bounced back in 2013 and 2014 if you held on. The moral of the story is that even the FOMC, which decides the path of interest rates, does not know exactly when they will raise rates, making it a bit of a mug’s game to anticipate with much certainty. Since raising rates (December, 2015), the U.S. economy has grown at about 1 per cent, so it is easy to make the argument why they will do nothing in September too. The lower-for-longer rate conundrum is not likely going away any time soon and some have suggested they want to raise rates only so they can cut them again in the next recession.

A fed rate hike should strengthen the U.S. Dollar versus most currencies and that should have a negative impact on commodity prices—at least that has been the historical correlation. With the seasonal trend for WTI inventories looking bad for prices for the rest of the year, this should be a headwind for the Canadian dollar. 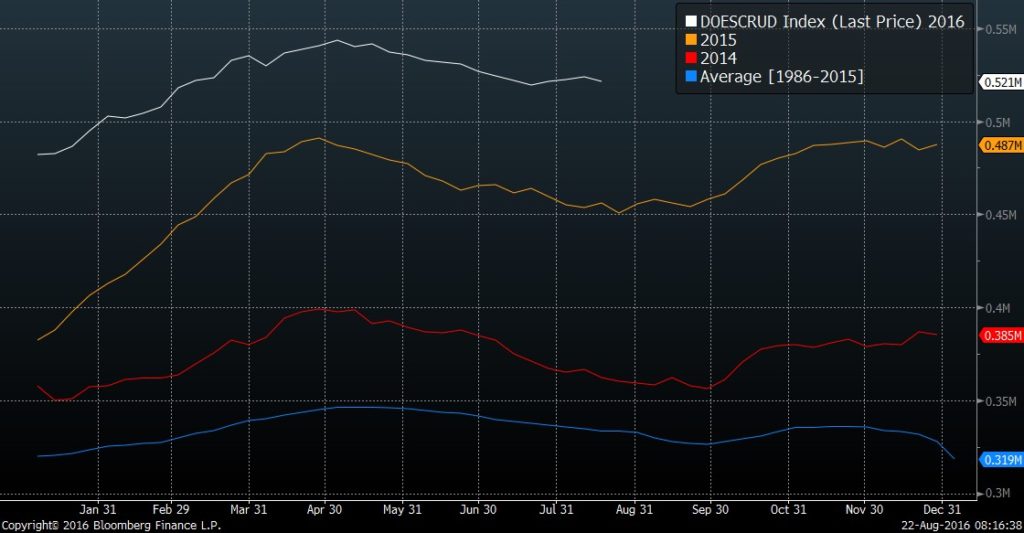 Other political risks around October include the Italian referendum that could see a change of government to the anti-EU Five Star Movement by 2018. This could be very destabilizing for the EU and compound the BREXIT risks causing a further strengthening of the U.S. dollar.

With equity valuations poor and market risks high, one of my top positions right now is being long the U.S. dollar. One of the best positions for Canadians over the next few months is sitting in a U.S. money market ETF like SHV.N or PSU-U.T with the Canadian dollar at 78 cents. One caution: if you pay 2% to buy and sell your foreign currencies, the transaction costs will wipeout most of the potential profit. If you are up for a little more risk with no direct FX costs, than buying ZPW.T gives you exposure to the U.S. dollar and a 7% yield, though you are exposed a bit to falling U.S. equities. The most likely scenario for the next few months is that the combination of a pending U.S. rate hike and the likelihood of crude oil falling back to $35 as inventories build after the summer driving season pushes the Canadian dollar 4 to 5 per cent lower toward 73 cents some time in Q4. Whether it is September or December, the bias for the U.S. to raise rates should remain and the bias for a weaker Canadian dollar should persist into 2017. For the Snowbirds looking to go south in the colder months, now would be a good time to buy U.S. dollars for your trip.

I have positions in ZPW.T and the US dollar for clients.

Follow Larry on this topic both on BNN:  http://www.bnn.ca/bermans-call/berman-s-call-part-three-educational-segment~935012 and in the Globe & Mail – http://www.theglobeandmail.com/globe-investor/funds-and-etfs/what-investors-should-do-about-the-feds-interest-rate-conundrum/article31482101/?ord=1