The Trump Administration, for all it’s challenges, scored a victory this week on the foreign policy file. It probably does not move the disenfranchised American swing voter much, but it is a much-needed small win for the COVID beaten-up profile of the President. We surveyed the initial thoughts from geopolitical channels we follow, and the views are similar. It’s a small win. In our view from a US election standpoint, it probably is a non factor. Their summaries are italicized below. However, the market implications probably play out in the energy sector and not in a board way.

We learned from the fall of the Berlin Wall, that a peace dividend can be a powerful catalyst. In this case, the risk premium in the Mideast has most been carried by the price of crude oil and Brent versus WTI spreads. Spreads in the oil futures markets did not move much on the news. Overall, Brent crude faces significant overhead technical resistance from the March 6th-9th OPEC+ breakup gap and the falling 200-day average as we can see in the chart. The combination of a more peaceful path in the Mideast, the risk of a global second COVID-19 wave, and the technical resistance on the charts suggests that we should see a near-term correction in crude markets. It’s not clear how long it could last, but growth uncertainties are much higher than growth tailwinds looking forward. Seems I’m in the minority vie won this.

No doubt this can lead to a huge improvement in long-term Mideast relations with democracy, which is a very welcome step, but make no mistake, Iran does not believe Israel has a right to exist and the problems with extreme views in the region run deep. A change in the US Administration in the upcoming election may be a factor too given the Obama Iran nuclear deal that Trump broke. So there are many wildcards to consider for energy markets and there is no real clear path. But a peace dividend is always a welcome addition. 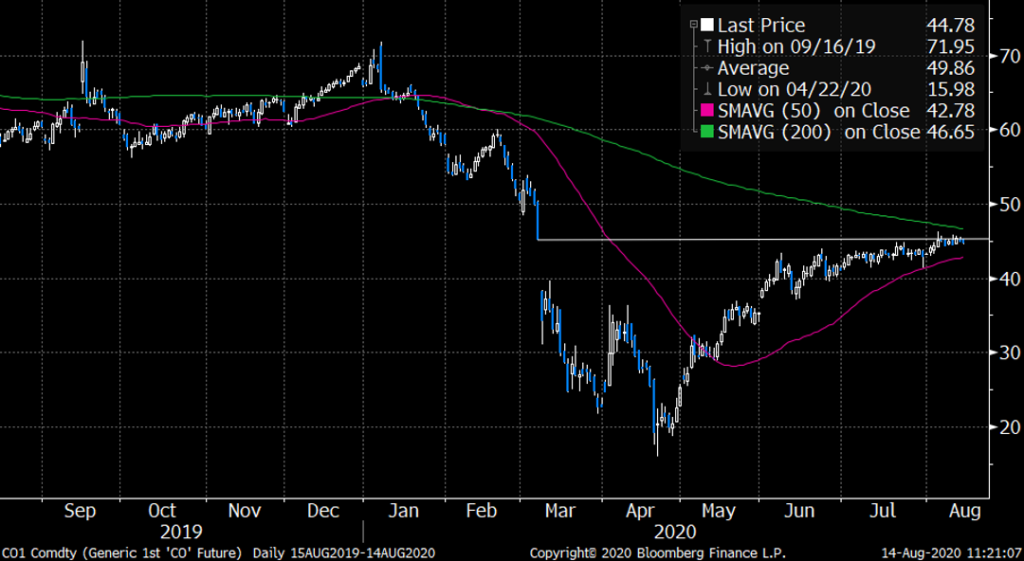 According to Eurasia Group:

“UAE and Israel strike historic deal: In an historic development, the United Arab Emirates and Israel have agreed to normalize ties. As part of the deal, Israel’s Prime Minister Benjamin Netanyahu has agreed to suspend his government’s plans to annex swaths of the occupied West Bank in the near term (he made sure to emphasize that the plan was merely on hold, likely a nod to his right-wing base). The peace deal, brokered by the Trump administration, marks the first time that a Gulf Arab state has normalized ties with Israel — though it’s widely believed that shared concerns over the threat posed by Iran have led to backchannel cooperation between Israel and the Gulf Arab states. Many analysts, therefore, say that the agreement is largely symbolic, formalizing ties that have existed for years. It’s only the third Arab-Israeli peace agreement since Israel’s establishment in 1948 (a deal was signed with Egypt in 1978 and with the Kingdom of Jordan in 1994). Two key takeaways: the move gives the Trump administration a big boost before the November 3 elections as he struggles to keep up in the polls. It also reveals that lack of progress on the Israeli-Palestinian issue will no longer impede powerful Arab states from establishing formal ties with Israel, long the official position of the Gulf Cooperation Council. “

According to Stratfor Worldview:

On Aug. 13, Israel and the United Arab Emirates announced their intention to normalize relations, paving the way for increased economic and diplomatic ties and setting a precedent for other Arab Gulf states to follow suit. The agreement, which was brokered by the United States, sets a roadmap for Emirati and Israeli officials to sign trade, travel, investment and technology deals as they pursue a path of diplomatic normalization for the first time in either country’s history. It also includes a pledge by Israel to maintain the freeze of its pledged annexation of parts of the West Bank, as well as for Israel and the United Arab Emirates to cooperate on the development of a COVID-19 vaccine. The deal, however, notably does not create a realistic roadmap to restart the Israeli-Palestinian peace process, nor does it change the current trajectory in the West Bank toward making a future Palestinian state unviable.

The agreement sets a precedent for other states to normalize relations with Israel, particularly in the Arab Gulf region, with U.S. officials already signaling that Bahrain and Oman may soon follow with their own normalization declarations. Many Arab Gulf states have also been seeking closer ties with Israel in recent years: Oman hosted Prime Minister Benjamin Netanyahu in November 2018; Bahrain has quietly hosted Israeli business and security delegations for many years; Qatar has long worked with Israel to supply humanitarian aid to the Gaza Strip; and Saudi Arabia has reportedly purchased Israeli security technologies. While some of these moves have been driven by mutual hostility against Iran, some Arab Gulf states have also sought increased access to Israel’s economy and technology sector, as well as Israeli companies looking for diversified markets. With the United Arab Emirates’ public declaration of normalization, these states will be better able to explore their own paths to similar relationships with Israel in their hopes of taking advantage of the country’s dynamic economy and tech sector, as well as benefit from Israel’s military superiority — much like how Jordan was able to use the 1979 treaty with Egypt as a precedent for the eventual signing of its own treaty with Israel in 1994. States even beyond the Arab Gulf region may also be more willing to explore or expand their relations towards normalization. Sudan, for example, has been exploring new relations with Israel by opening its air space to some Israeli flights.

Israel and the UAE have announced their intention to normalize relations for the first time in either country’s history, setting a precedent for other Arab Gulf states to follow suit.

But while the agreement promises to freeze Israel’s annexation process, Israel has made it clear that it could pick up annexation later on. Israeli officials said that they would suspend annexation at the United States’ request in order to implement this deal. This, however, was not a difficult concession as the process was already essentially frozen. Amid a resurgence of COVID-19 infections, the Israeli unity government signaled it was more focused on managing the fallout of another wave of the virus over absorbing the potential repercussions of annexation. Circumstances may become more favorable for annexation again, should the pandemic ease and Israel’s unity government might stabilize. Further normalization of its regional ties might also embolden Israel by signaling a lack of international interest in pushing back against annexation, which could prompt Israel to carry out the annexations its pledged to do in the Jordan River Valley, settlements in the West Bank and other territories that would make a future Palestinian state unviable.