The Case for Having US Dollar Exposure

There are several key factors all coming together in the next few weeks to months that should shape a somewhat bearish outlook for the Canadian dollar for the next year or two.

Here’s a look at them:

This week, the market mostly expects the Bank of Canada to raise rates 25 bps. Economist consensus is nearly universal, while the OIS (overnight interest rate swap) market shows an 83 per cent chance (as of 7:00 a.m. ET Monday) the BoC will raise rates Wednesday. We also see expectations for one more rate hike by the end of 2018. When compared to the U.S., where three rate hikes are mostly priced in. The confidence level shot up significantly following the December employment report (Jan. 5).

David Rosenberg, chief economist at Gluskin Sheff, pointed out last week the details of the Canadian employment report were questionable. He points out that since the summer, the raw (not seasonally adjusted) data show a net 115,000 jobs being lost. And if you do believe that 78,600 seasonally-adjusted jobs were created in December, 72.600 were in services. Of that, 25,000 jobs were in financial services, which it took the previous 12 months to create. Ontario, the hub of financial services jobs, posted only marginal jobs growth and actually lost 13,000 full time positions in December. The data is simply not credible. There is a chance the Bank of Canada does not raise rates and waits out the NAFTA decision if they are looking at the data like Mr. Rosenberg is. If they do raise rates, chances are it’s a “dovish” rate hike meaning they suggest they move to a wait and see mode considering “other” factors.

Last week, we heard from Canadian officials suggesting the Trump Administration was likely to tear up NAFTA. While they might extend negotiations, we believe Trump is most likely to break the deal and renegotiate it. Views here are widely split as Trump has been very unpredictable. For Trump, his ego demands that he do something. He wants the Mexican wall funded as part of a comprehensive immigration reform tied in with DACA discussions. We’d be surprised if the Dems went for that. He said last week that he would use NAFTA to make Mexico pay for the Wall! There is a very good primer on what Trump can and or can’t do from CD Howe here.

“They can pay for it indirectly through NAFTA,” Trump said Thursday in an interview with The Wall Street Journal. “We make a good deal on NAFTA, and, say, ‘I’m going to take a small percentage of that money and it’s going toward the wall.’ Guess what? Mexico’s paying.”

It might be seen as an easy win from his perspective and a massive boost to his ego, which may very well be the biggest factor to weigh. The uncertainty of breaking NAFTA is likely worth 3-5 per cent weakness in the Canadian dollar and would raise the inflation risk (and higher rates) in the US. Our understanding is that he could do that via executive order, but also that Congress could block it. If President Trump was to take such a position and revoke Proclamation 6641, a court action might well follow. In the interim, however, U.S. administration could be obliged to comply with the presidential revocation and the old tariff structure could, at least temporarily, be in place. Bottom line, the president has formidable powers to initiate action on the trade front that could seriously frustrate the functioning of NAFTA, possibly to the extent of rendering it inoperative, and that could be used to force concessions from Mexico and Canada, as well as from other trading partners of the United States. For Trump, this is more about Mexico than Canada and we will likely get sideswiped here. On the other side of the ledger, just to keep the markets more balanced, an article out overnight suggests risks of NAFTA breaking are extremely low.

New rules are already having a material slowing in the housing sector. It’s be the biggest driver of growth in Canada for several years. That’s likely to be a material growth headwind too, which would be a limiting factor for rate hikes in Canada. Some one-third of Canadians already cannot afford keeping up with monthly payments.

The Mexican Peso, viewed globally as a petro currency (like the Canadian dollar), has some impact too. Since the beginning of the year, the peso has rallied about five per cent. Part of that is that oil prices for sure, but some lessening of NAFTA risks as well. A move below 17.50 would suggest NAFTA risks are mitigated and above 20 that they are increasing. 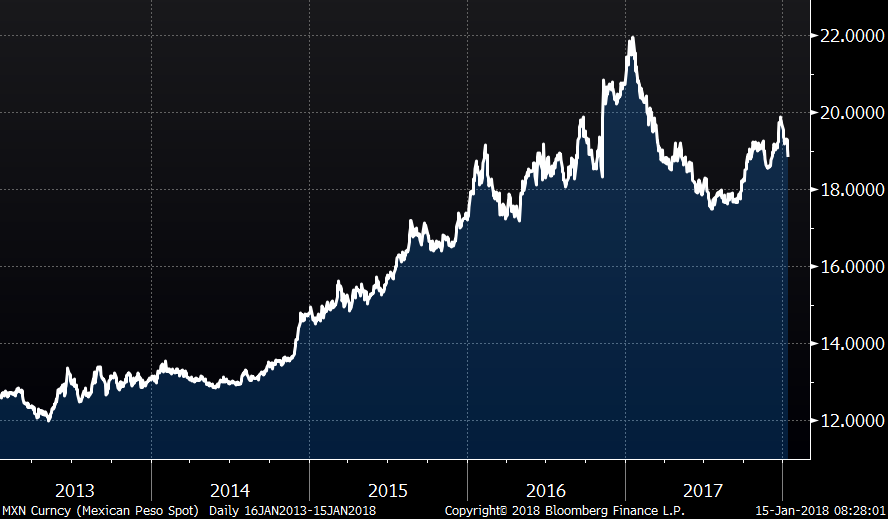 And then there are oil prices. Once of Canada’s biggest exports is trading at a $25 discount to U.S. prices that are getting a bid from the irrational exuberance that is gripping markets from bitcoin to the can’t miss U.S. stock market. As oil prices have rallied, oil producers are selling forward like mad. If they really thought this was a permeant shift higher, they would not likely be selling forward so aggressively. When oil prices correct, that should be a Canadian dollar negative too.

And then there is the Fed that is likely going to try to raise rates three to four times in 2018. The new Fed Chair is far more hawkish than Janet Yellen was. All this added up suggests that the Canadian dollar should be two-three per cent weaker than it is today.

I have removed all my currency hedges and look for the Canadian dollar to weaken about five per cent from current levels this year.

We are introducing our spring tour speaking dates. Last year we introduced the idea of investor behaviour types. This time around we will drill down into how to build and manage ETF portfolios to suite your investor personality. Please visit The Investor’s Guide to Thriving to register for the 2018 show in your city.