Remember Enron, Bernie Madoff, Worldcom… In what has to be a colossal poster child for how laughable the audit process can be, Ernst & Young, accused their client Wirecard of “an elaborate and sophisticated fraud” that allowed more than $2 billion to go missing. E&Y are rejecting responsibility for their role in the debacle and preparing for the inevitable avalanche of lawsuits. For those that do not remember, more than half of Author Anderson’s business, the firm that missed Enron’s fraud works for E&Y. Coincidence? According to Wikipedia:

Many partners formed new companies or were acquired by other consulting firms. Examples include:

My goal here is not to beat up on E&Y (well maybe a little since their ONLY job as an auditor is to vet the accuracy of the numbers). My point is that market and economic stress often lifts the veil and uncovers who’s wearing what clothes. It’s harder to hide when cash flows are stressed. There WILL be more. We have had an unprecedented run on the economy which is now over and is being masked by colossal money printing. Remember Goldman Sachs helped Greece hide their true liabilities “off book” on the eve they were admitted to the Euro Union.

That leads me to the Federal Reserve’s bank stress tests and a look under the hood of the market behaviour in the past few weeks as it pertains to the Fed’s balance sheet. Turns out the Fed has stopped the net new purchases of debt in the past few weeks. The Fed suggested in a worst-case scenario banks could lose $700B. Frankly, that’s laughable. The off-balance sheet risks are far greater than the Fed would like us to believe. But they can’t tell us that or Congress would have to make a new Dodd-Frank type law to make it even harder for them to do business. They just voted to relax one of the Volker rules this week.

What concerns me the most is this chart below. The market can seemingly only rise on money printing (debt monetization). We know there is more to come, but I want to underscore and bold that this is NOT bullish, it’s actually a sign the system is fragile—very fragile. It most certainly will end badly, especially for the newly minted Robinhood gang, I just can’t say when and that is the most difficult part of weighing the fear of missing out versus real fundamentals, which should NEVER be the reason you buy stocks, but often is the greatest overwhelming driver of investor decision making. 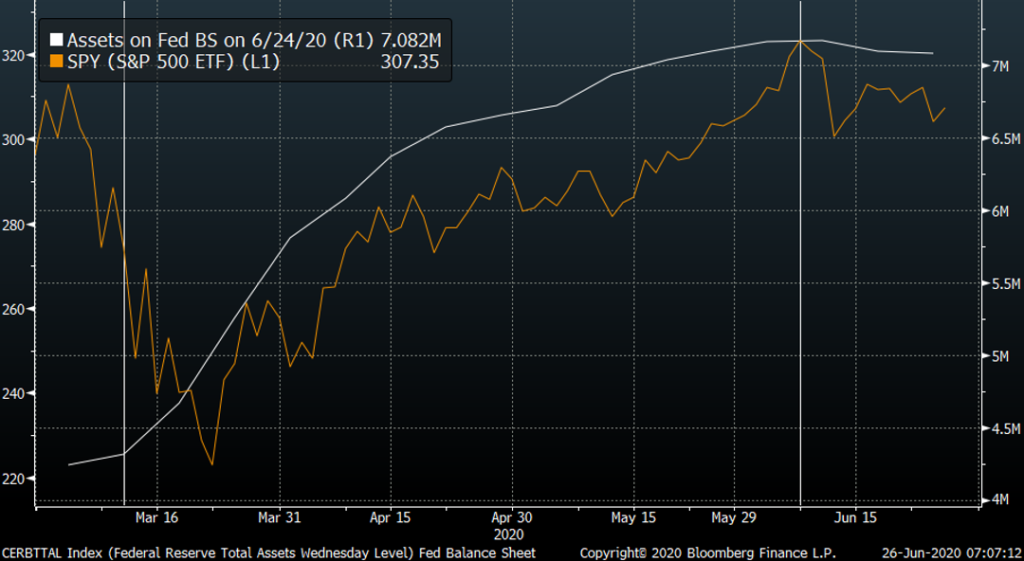 Do you want to be that in the name of financial conditions the Fed starts the printing presses again soon. Gold exposure remains my favourite asset class.

Subscribe to my NEW YouTube Channel where I will be focusing more of our investor educational efforts.

One thought on “Global Bear Market Should Uncover More Wirecard Fraud, US Bank Stress Tests Will Not!”