Is it Time to Buy Canadian Energy? There are Options

It’s not a surprise that I have been in the camp where traditional energy demand would be replaced by low carbon alternatives over time. The vast majority of people believe that we should do something about climate change (me too!!!). So longer-term, the energy sector is an underperform. That said, there will likely be tradable rallies along the way. For me, I want to overweight a sector where I believe it can add value and underweight or avoid a sector that performs poorly. That’s basically called ALPHA or the outperformance one can achieve by actively selecting a security versus just buying exposure to the market (BETA) with a low cost ETF. This week’s Berman’s Call roadshow is in Alberta, and while my topic is fixing fixed-income, the energy sector is always amongst the top questions I get. I’m currently long US energy ETF XLE (with a covered call) and short a put spread in crude oil (USO). If you are wondering what that means read on…

Politically, the LEFT leaning parties in Canada are anti carbon and believe that fighting carbon is far more important than the economic prosperity it historically has delivered. That has been painfully obvious from Trudeau’s comments about shutting-in the oil sands to Bill C-69 to cancelling of Energy East. With the NDP vote now critical to the Liberal minority, odds are that we will get even less political support for Canada’s biggest natural resource. So sad to say, Canada is an underperform given the energy sector in the S&P TSX is still very large though rapidly shrinking. Look for Encana (Ovintia) to be dropped from the TMX index while Trans Canada Pipeline (TC Energy) kept their home office in Calgary while Ovintia is moving to the US. One risk that Ovintia may have not fully thought out is an Elizabeth Warren presidency.

So with all that in mind, how could you earn the approximate 3% yield the sector (XEG) offers with less risk of underperformance and upside potential should TMX actually get built and capacity to sell our products to more customers relatively unimpaired by political will (simply read as more pipeline capacity). A minority government will typically fall in about 2 years and it’s usually support for budget priorities as a catalyst. My guess is the 2021 budget could fail and an election in the spring or summer of 21 seems most likely.

Learning to utilize options on the ETF representing the Canadian energy sector (XEG) that has been around since 2001 is key. Sadly, the ETF has earned a total return of about 3% since inception. So to be fair, I’m not sure why anyone would want to own it unless you see the future of energy changing. So basically, you’ve earn the dividend and little more.

Options are listed on the XEG as far out as March 2022. You can sell 2 units of an $8 put for about $1 (maybe a bit more). That earns you 12.5% yield for the next 2.5 years or about 5% annually, way better than the dividend. If the ETF is about 2% or lower than it is today (below the $8 strike), you must buy it at $8. You can use about half of that yield to buy 1 unit of a $9 call for about $1. Best case scenario if we get a Warren president in the US and she hates carbon as much as our current government, WTI prices rise back to $100 as millions of barrels of supply comes off the market as she bans fracking. If TMX gets built (still questionable), then we could see the ETF back to about $13-14. 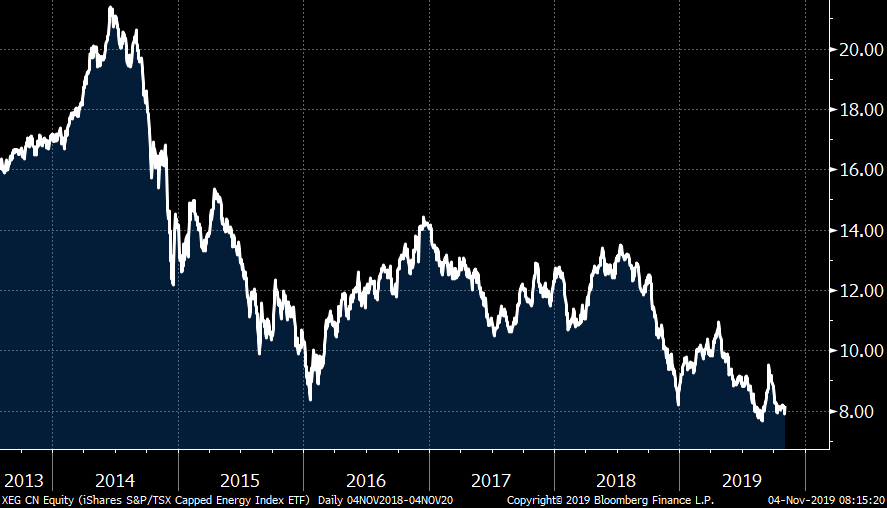 Come out to my Fall roadshow this week in Alberta. While energy is not the focus, option strategies are. I’ll show you the important roll fixed-income plays in your portfolio and some ideas how to deal with the low rate environment and the potential inflation in the future through use of options. Option strategies are likely to become a bigger part of portfolio construction in the coming years.