Rise and Fall of a Nation: Is the US$ at Risk of Losing Reserve Status?

Ray Dalio has recently put out some research on the rise and fall of reserve currency status. You can read all the details here and here.  What caught my eye and is most interesting is part of the current battle between China and the US for leadership in 5G and technology in general and the recent narrative around the US weakness.

From the perspective of China, their currency is massively undervalued when we do the Big Mac test that equates the purchasing power of the famous burger adjusted for exchange rates. The US dollar is far more balanced versus Europe, Canada and most of the developed world on a PPP basis. 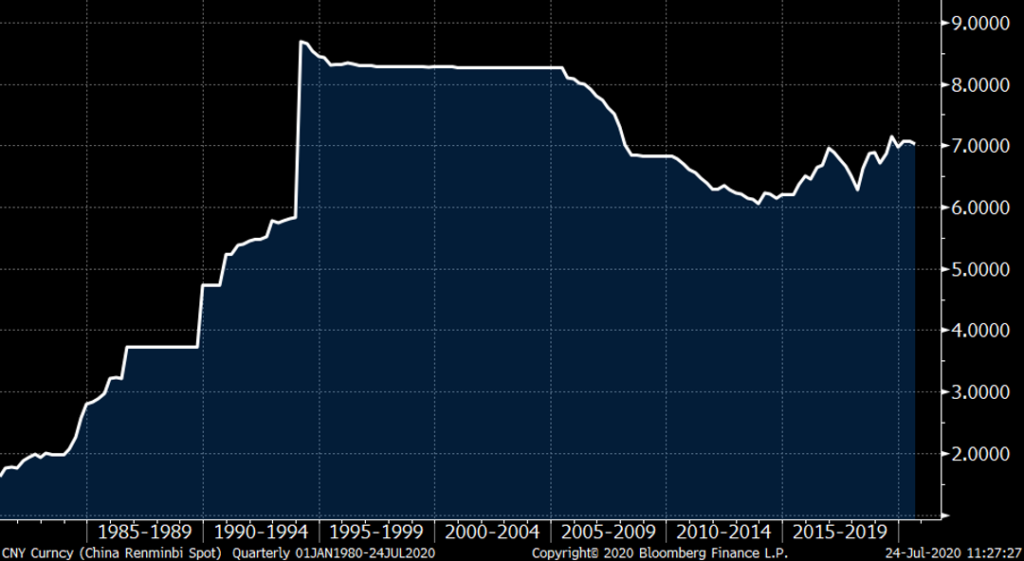 Perspective is everything though and the narrative that the US dollar is expensive may only be applicable to China, South Korea, Japan from a trading perspective. In 1985 the Plaza Accord was an agreement between G7 countries that the US$ was too strong. A look at the long term chart of the US dollar versus the developed world trading partners and we can see we really are not at all expensive. But we are against China. When the Euro fist started in 1999, its value versus the dollar was about 1% off of where it is today. On a PPP basis, there is no big imbalance here.

In the early 2000s the tech bubble first attracted money to the US market and then stayed there in US Treasuries as the bubble broke. This was the last time the US$ was very strong versus Europe. At the tough of the last crisis led by US housing, the US dollar became very cheap to Europe. But as growth troubles hit Europe the past decade and the shift to negative rates, the US dollar has moved closer to the long term average.

Since the world came off the gold standard in 1971, the average US$ index has been about 100. We are less than 5% from the 50 year average and have been there for several years. 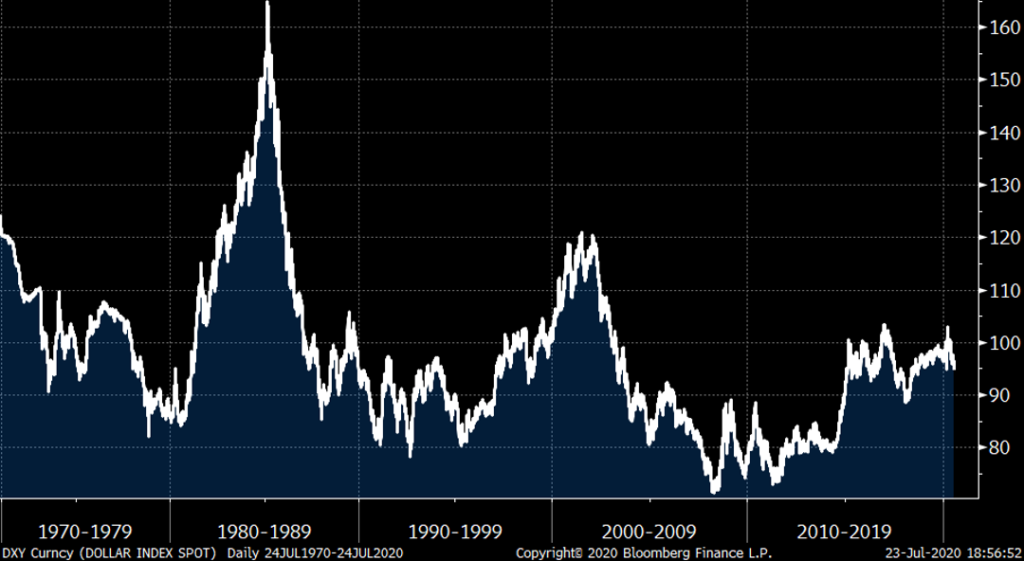 The Canadian dollar is currently caught up in the sentiment around the weak US$, but it’s losing on the crosses versus the euro, yen, and British pound and should be weaker. Not so much on a PPP basis, but on poor governance and weak fiscal positioning relative to the US dollar. This suggests that it’s not a strong new view on Canada, but a flow that the C$ gets caught up in.

Dalio’s work on large cycles, however, is measured in term of multi-decades and centuries and is a MUST read for fans of Berman’s Call. The rise and fall of global leadership and the battle with China is just beginning. China is the challenger for reserve currency status for the foreseeable future, it’s certainly not Europe, though there is some excitement around common EU bonds now. How long will it last that the German and Dutch tax payers will supplement the Italian tax payer. Not long—perhaps a few years, but the next stress to the region will almost certainly break the bond (so to speak). Unless of course, central banks are just going to print money and we are in the early phases of changing the way we think about the cost of money, interest rates and inflation. In which case buy gold in whatever currency as they will all be devalued relative to gold.

For now, and until China fully opens its economy, we see more of a de-globalization where China gains more within their region of the world and takes on status of a reserve currency more localization. Big thing for the US is not to damage ties to the Euro block. If they start trading in yuan, the reserve status is in trouble. These issues are measured in decades so it’s not something to trade off of or base any portfolio decisions on, but this is a major theme globally and likely has more of a negative impact on growth and inflation trends.