Predictit is a crowdsource betting site that uses Vegas type betting odds to take wagers on outcomes. What we are hearing and seeing in the local election ground games seem quite different. And then there is the major trust factor in the polling that was so wrong in 2016. What this says to us is that the markets are not priced for a surprise. The biggest unpriced risk is a tight enough race that gets to the Supreme Court (SCOTUS) to be determined. This would likely make Bush v. Gore a walk in the park from a volatility perspective if these battles are happening in multiple states. Watch the movie Recount if you have a chance in the next few weeks for a refresh of the events before the election.

I think America likes gridlock in DC. They like checks and balances. The Senate may, just barely, hold on to 51-49 GOP outcome. Anything less, and Kamala Harris is the tie breaker assuming Biden is the President. I believe the White House flips. But I see a very high probability scenario that we will not know for sure until the courts have decided who the president will be. I also think the pollsters have adjusted for biases that they missed in 2016, but improved on in 2018. Still, many and maybe most, still do not believe the polls. This table is a recap of the past few elections in key states.

Clinton was ahead nationally by 2.8% in the polls on election day and won the popular vote by 2.1%. That’s pretty tight. But Trump won the vast majority of counties (GOP 2630 to DEM 486) and the electoral college, which makes the national polling very difficult. He won in many places by the slimmest (<1%) of margins too. While I do not think Biden is a good candidate and I don’t support many of his policies, I think he caries it as even the silent Trump voter that made a massive difference in 2016 just can’t pull the trigger again. The election is truly a referendum on the president.

Goldman Sachs has for years created equity baskets representing different themes. The list below shows (as of Friday’s close) their performance in October. The Biden wins themes are clearly beating the Trump wins themes. 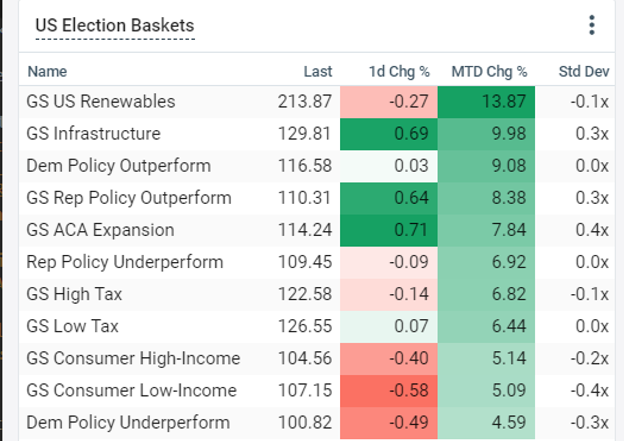 It’s clear by the market behaviour and response to “stimulus” based headlines there is great expectation of a stimulus Bill. We hear of yet another Washington “deadline” early this week. This is a huge political potato and an election negotiating tactic to be sure. Why would Pelosi give Trump a win before the election? She will not likely, she is a master at playing politics.

If no Bill gets done this week, I expect the markets to begin this weakening trend. The 200-day average for the S&P 500 is as around 3124 (-10.3%) and at 9654 (-17.3%) for the NASDAQ 100. We think those are minimum downside tests for the markets in the next few months. But hopes for this inevitable stimulus should limit the downside to perhaps a bit below those levels. Many say Washington doesn’t matter much for market outcomes. While that true at some level and in the very long run, shorter outcomes are very much influenced by policies. It’s the uncertainty that markets have the biggest trouble with and of that we are not likely priced correctly.

Our Berman’s Call virtual roadshow is back on. We had our first show on October 1, 7 pm ET and you can see all of the replays here. Sign up for the series by clicking here. The series will run every Thursday at 7pm ET through December 3. There will be lots of opportunity to ask questions of markets and your favourite ETFs and stocks.