According to Wikipedia: The Fourteenth Amendment to the United States Constitution was adopted on July 9, 1868, as one of the Reconstruction Amendments. Arguably one of the most consequential amendments, it addresses citizenship rights and equal protection under the law and was proposed in response to issues related to former slaves following the American Civil War. The amendment was bitterly contested, particularly by the states of the defeated Confederacy, which were forced to ratify it in order to regain representation in Congress. The amendment, particularly its first section, is one of the most litigated parts of the Constitution, forming the basis for landmark Supreme Court decisions such as Brown v. Board of Education (1954) regarding racial segregation, Roe v. Wade (1973) regarding abortion, Bush v. Gore (2000) regarding the 2000 presidential election, and Obergefell v. Hodges (2015) regarding same-sex marriage.

I’m a movie lover. I’ve seen the Ruth Bader Ginsburg story, On the Basis of Sex, several times—it’s one of my favourites. I’m a huge believer in equal rights and personal liberty she championed. Sadly, this will become a huge issue for markets. The immediate White House response and that of Senate Leader McConnell suggests the GOP will try to appoint a more socially conservative justice to replace the very liberal RBG. Appointing a young social conservative could tilt the bench for decades. Amy Coney Barrett is the leading contender along with Barbara Lagoa. All will remember how the republicans shut down Obama’s SCOTUS nomination prior to the 2016 election. Any hopes for a pre-election bipartisan (skinny) Bill is likely dead on arrival with this new battle. The markets will need to deal with this added uncertainty in the coming weeks heading into what will likely be the most contentious US election in history. This will almost certainly involve the supreme court of the United States (SCOTUS) like we saw in Bush v. Gore (2000). There is already constitutional litigation happening at the State level to make it more difficult for people to vote in key states like Pennsylvania regarding mail-in voting.

In Bush v. Gore SCOTUS found that that the use of different standards of counting in different counties violated the Equal Protection Clause, and ruled that no alternative method could be established within the time limit set by Title 3 of the United States Code (3 U.S.C.), § 5 (“Determination of controversy as to appointment of electors”), which was December 12.

Media organizations subsequently analyzed the ballots and found that the originally proposed county-based recounts would have resulted in a different outcome (Bush victory) than a full statewide recount (Gore victory). Florida subsequently changed to new voting machines to avoid punch cards which had allowed dimpled cards or hanging chad.

The President has made mail in voting a SCOTUS issue with his inflammatory rhetoric in recent months. He even used Sept 17 (US Constitution Day 1787) last week on Twitter to inflame the fight that is coming. Many believe we will see a Trump lead on election night, as far more Democratic supporters will vote by mail than vote in person according to recent polling. Some speculate it could take a week (or more) before all the mail in votes are scrutinized and counted (without litigation). Can you imagine the uncertainty that week? In 2000, the Bush v. Gore controversy occurred at the same time the tech bubble was breaking (sound familiar). Perhaps it’s worth an additional 2-3% uncertainty factor. Perhaps a bit more given the different policy path regarding taxes. 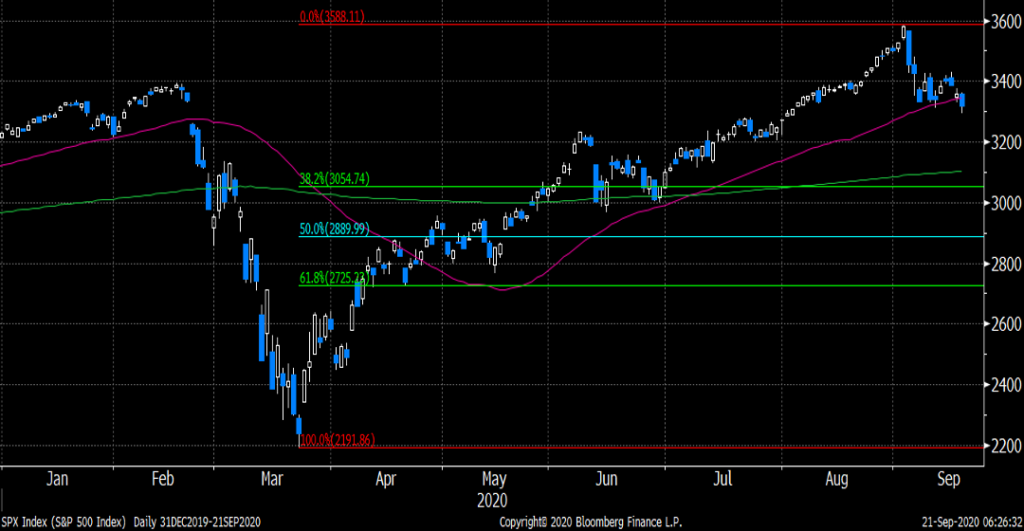 The S&P 500 started the year at 3231. It will likely be some degree less than that on election day and if this scenario plays out, the 200-day average flattish around 3100 is at risk. Tow dips below 3000 was a good support level in June with two dips to 2800 also good support in May. For those of you with cash looking to buy, 2890 is probably a good bet before the year is out (50% of the COVID rally). If COVID wave two is a bad one, as it looks like it could be, 2725 is the 61.8% retracement, and would be a likely target too. That will put financial conditions under some stress and the Fed would likely amp up the printing press once the froth comes off the markets and we are past Nov 3. Doubtful they will act before on the moral hazard of political risk. Post election results, unless Congress totally drops the ball on additional stimulus, I doubt we see it go much lower. A democratic sweep of Congress and the White House might be the exception.