The Canadian Dollar: To Hedge or Not to Hedge?

Last week Bank of Canada Governor Poloz tossed a bit of a curveball to investors. There is no doubt the unbelievable Canadian employment numbers have been improving. When I say unbelievable I mean not credible, rather than “wow they have been so impressive”. Despite the stronger headline numbers, stagnant wage growth and weak business investment characterize the backdrop of the Canadian economy. Despite this lackluster backdrop, the BoC modestly upgraded the growth outlook on the continued housing boom, which some took to mean that a rate hike is on the horizon.

The Monetary Policy Report (MPR) noted that consumption and job growth have been surprising to the upside, but that is likely a function of the insane housing markets is Toronto and Vancouver more than anything else. No doubt the low rate backdrop is causing people to stretch. One big wildcard is a border tax and what that might mean for the Canadian export market, which is a huge unknown.

If the US is serious on comprehensive tax reform, the primary reason for the Trump market rally, then we should expect a boarder tax will be needed to pay for it. The deficit hawks in Congress will not go for the reform without a border tax according to our sources. That could make the US dollar much stronger in the coming years. Trump has now become a currency manipulator himself with recent comments that the US dollar is too strong. Bottom line is that every government from the perspective of driving GDP, is a currency manipulator. Poloz wants a weaker C$ so that exporters can do better helping jobs in Canada.

Looking at whether to currency hedge or not hedge your portfolio, there are many moving parts. The most important for the individual investor is time frame. My time frame is typically looking out about 1 to 3 months. I take a much shorter term perspective because my cost of hedging as an institutional investor is very low. Yours might be much higher depending on your cost of trading. Those of you that go South for the winter know that the cost of buying and selling US dollars at the bank is significant. For those of you trading US equities in Canadian dollar account know the cost of currency can be over 1% per trade making it more expensive than any management fee or commission out there. One of the reasons I love ETFs over single stocks is the ability to hedge currency exposure when investing globally. 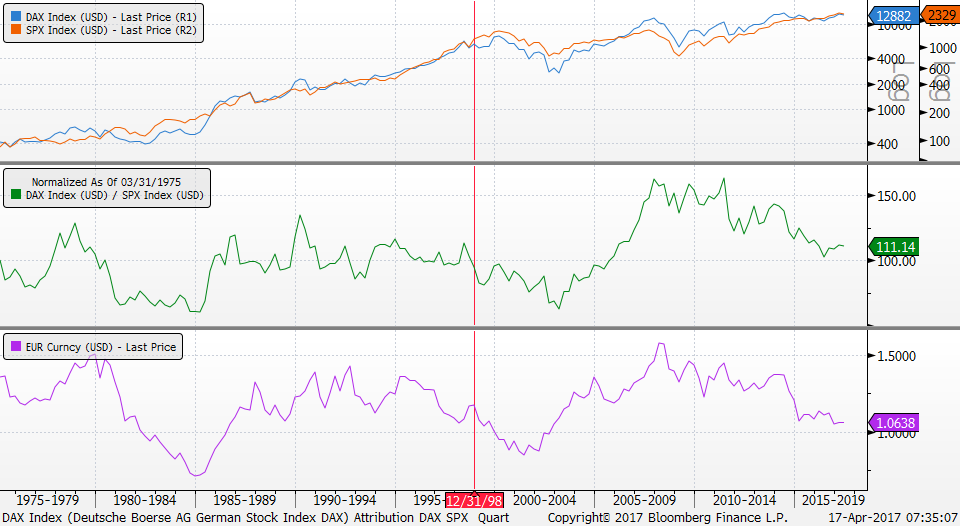 The first chart shows the German DAX index (in US dollars) from 1975 to today compared to the S&P 500. These two key benchmark indexes tend to go up and down together. The green line in the middle pane is the relative percentage return between the two indexes. The purple line is the euro exchange rate versus the US dollar and prior to 1999, the synthetic euro (or basically the old deutschmark). The statistical analysis reveals that currency volatility drives about 70% of the relative return in developed markets.

For Canada, the key ingredients to follow that drive capital flows between Canada and the US dollar are related to trade (read Oil prices) and on the capital account relative interest rates (does Canada yield more or less than the US). In the short run, we can also consider the positions of speculators as tracked by the Commitment of Traders data. Expectations of BoC policy too plays a roll, so comments from Poloz last week influence (tilt) the speculative flow one way or the other.

My best guess is that oil price bounce between $40-60 for the next few years and that interest rate differentials between Canada and the US point to the US raising rates while the Bank of Canada holds rates steady. The big wildcard over the next year is the boarder tax. The mechanics of the tax could easily see the US dollar strengthen 5-10% against those currencies that the US taxes most. 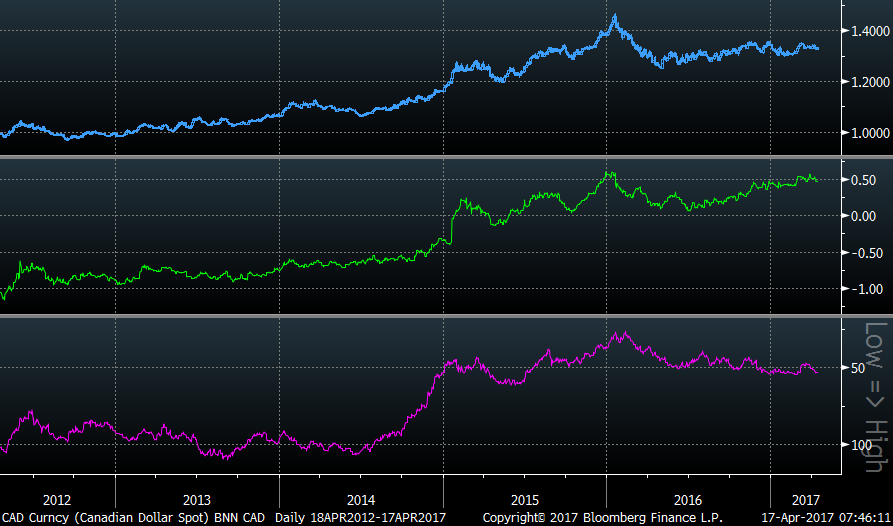 If you are a very long term investor, hedging your US dollar exposure at 73 cents or lower is prudent. But it’s a good bet that for the next few years, these competing forces keep the C$ ping-ponging between 70 and 80 cents. For now I think the bigger risks are that the C$ move towards 73 cents over the next year or so. Oil supply is ample and the US does want tax reform as the major consideration. Most everything else is noise. There is always the flight to safety into the US dollar on geopolitical risks that seem to be heating up too as a factor tilt.

Tactical investing is an important skill when managing your own portfolios. Learn how to use techniques like this to evaluate risk and return in how to be a smarter investor in our 7th season across Canada speaking tour. Free registration at www.investorsguidetothriving.com. Help us raise money to fight Cancer and Alzheimer’s by making a voluntary donation with your registration. Over the past few years, Berman’s Call roadshows have raised over $230,000 for charity thanks to BNN viewers, our sponsors, and our partners.