Following last week’s surprising US CPI report where the actual reported numbers were lower than even the most optimistic forecast, we expect members of the FOMC will recognize the need to soon slow the pace of rate hikes.

What all this means is that there are more economic headwinds coming and that the FOMC simply does not really know how to measure the lagged impact. Here is the conundrum. The lagged effect takes quarters to years to play out while the market can have the attention span no longer than the most recent headline.

The most recent one is from Federal Reserve Governor Waller who said on the weekend that they have a “ways to go” before cutting rates. Deputy Chair Brainard is speaking as we are on air in Washington DC on the economic outlook. Chair Powell does not have any speeches on the calendar in the coming weeks just yet. We suspect he will about a week before the Dec 14 FOMC.

As Milton Friedman et al have found, the economy’s adjustment to changes in monetary growth is not a discrete, all-at-once event but takes place as a distributed lag. The effects of a monetary policy action tend to begin gradually, build to a peak, and then subside. Thus, past monetary growth continues to influence GNP long after the monetary growth occurs. An increase in the rate of monetary growth temporarily stimulates real economic activity. Once such resources as labor and capital are fully employed, or once inflation becomes generally anticipated, monetary growth produces a permanent increase in the price level. While this description of the transmission mechanism is extremely simplified it suffices for an examination of timing issues.

One theory suggests that the cost of money needs to be restrictive (read higher than inflation) to slow inflation. Many are estimating this to be about 5%. The recent below expectations CPI number is encouraging, but they just do not know by looking at backwards looking data how it will play out. It seems to be what they are relying on. Our first chart is the core PCE (YOY) that is well known as the FOMC target. You can see the longer-term 1-2% range they are talking about getting back to (1995-2020). You can see that even in the Great Financial Crisis in 2008-2009, the number did not turn negative. You can also see the mistake of the 1970s by letting inflation get out of control. They do not want to cut rates like was done in the 1970s that would lead to inflation expectations increasing. Thus, higher for longer and the hawkish commentary we should expect to keep seeing.

The inflation swap curve is a very good benchmark for market based pricing of inflation. We can see that short-term (1-2 years) inflation expectations came down about 25-30 basis points.

We can see it a bit better in this chart of the 1-year inflation swap. You can see in Q1 when the FOMC was still in the transitory camp compared to Q2 as they started to hike rates, and Q3 as they have aggressively been hiking rates, that expectations have come down. 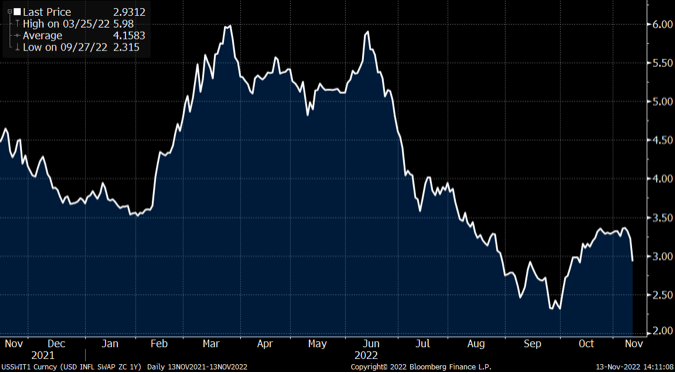 But the longer-term measure the FOMC likes (the 5-year outlook 5-years from now) has remained well contained. 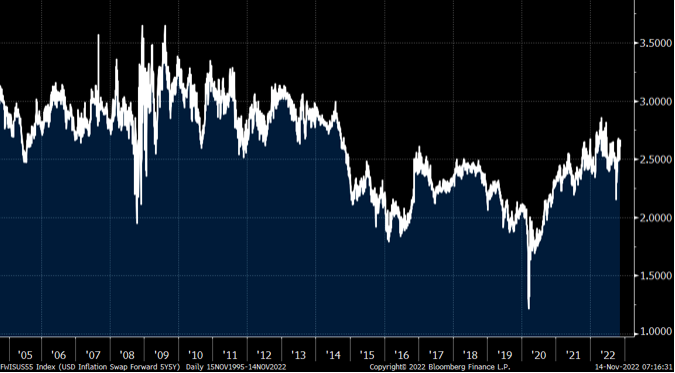 The other measure the FOMC likes is a survey of consumers. It’s one measure to price what above average income earnings in the financial markets price inflation at and quite another a survey of random average consumers. The one year expectation here is at 5.44% versus the market based pricing at 2.93%. It’s this disconnect that speaks to the core of the lagged impact yet to be felt by Main Street that Wall Street seems more content with. 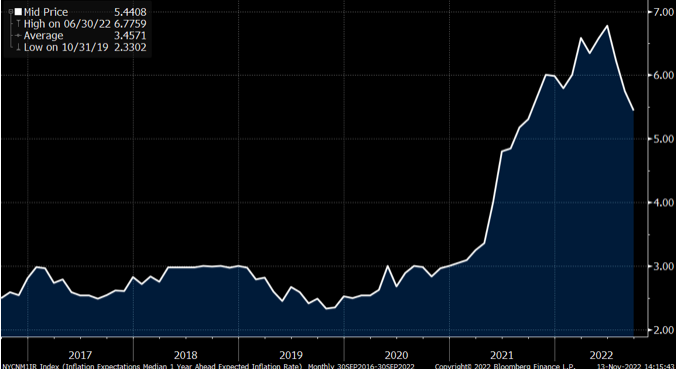